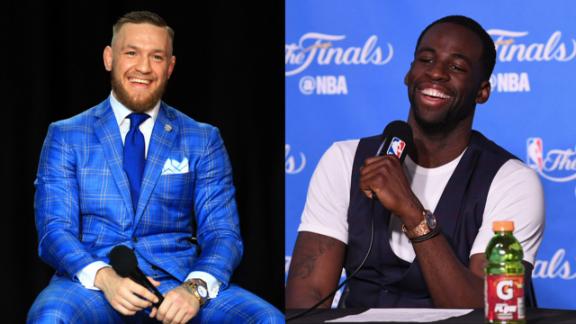 Draymond Green shook up social media by posting a photo of Conor McGregor rocking a No. 23 Golden State Warriors jersey early Sunday morning. Green, who currently wears No. 23 for the Warriors, captioned the photo with: "We rocking with Floyd bro not you... take that off bruh."

But McGregor isn't one to back down. The current UFC lightweight champ responded with: "That's C.J. Watson mate." You know, C.J. Watson, the veteran point guard who had a brief stint with Golden State from 2007-10.

This isn't the first time McGregor mentioned Watson to troll Floyd Mayweather. Watson was alleged to have been texting Mayweather's ex-girlfriend in 2010, a detail that emerged in some reports during Mayweather's domestic violence case in 2013.

Here's a tweet from McGregor from earlier this year:

With the trash talk and trolling taken up another notch by two experts of that trade, Green and McGregor, we have to ask: Who's the bigger trash-talker? Draymond is known to get under his opponent's skin on the court, and you've seen Conor at work during the press conference tour leading up to his fight against Mayweather.

Check out ESPN's full coverage leading up to the Mayweather-McGregor bout on Aug. 26.