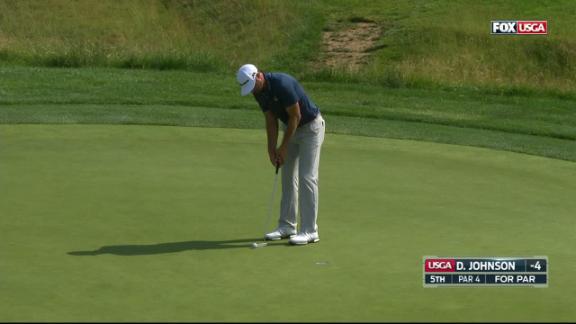 OAKMONT, Pa. -- Dustin Johnson overcame a controversial rules violation that consumed the final two hours of the U.S. Open on Sunday, playing the final six holes at Oakmont Country Club unsure if he would be penalized or not.

Johnson covered those holes in even par as others faltered around him, which made the decision to penalize him a stroke far less egregious and simply altered his victory margin from four strokes to three for his first major championship. But over the tense back nine, the ruling loomed large as Johnson was in a tight battle with Shane Lowry. Johnson ended up winning by three strokes over Lowry, Jim Furyk and Scott Piercy.

"It doesn't matter now and I'm glad it didn't matter because that would have been bad,'' Johnson said.

The possibility of a penalty was the talk of the tournament, with other players weighing in on social media, including the likes of Rory McIlroy, Jordan Spieth and Tiger Woods, all of whom criticized the United States Golf Association for its handling of the matter.

Woods, in a congratulatory text to Johnson, called it a "farce.'' McIlroy said it was "ridiculous'' and Spieth declared it a "joke.''

Jack Nicklaus, who was on site as an honorary chairman of the U.S. Open, congratulated Johnson as he walked off the green, telling ESPN.com later that "I told [him] what you did with all that crap that they threw at you was pretty good.''

Johnson, 31, who shot a final-round 69, was assessed the penalty because his ball moved on the fifth hole as he was about to attempt a 6-foot par putt.

After taking two practice strokes near the ball, Johnson briefly set his putter down before starting to put it behind the ball. At that point, Johnson recoiled, as the ball ever-so-slightly moved backward.

He immediately called in a rules official and explained what happened; he said he did not ground his club, so the rules official told him to putt out. But after looking at video, Jeff Hall, the USGA's managing director of competitions, approached Johnson on the 12th hole to explain he might yet be penalized after all.

"He didn't have the benefit of looking at the video,'' Hall said. "We had already seen it was on the video.''

The problem was it wouldn't be decided for sure until after the round, when the rules officials and Johnson could view the video of the incident.

The issue is whether Johnson's action caused the ball to move, a complicated determination on greens that are running at 14 on the Stimpmeter, which measures the speed of the greens.

Austin Johnson, who caddies for his brother, said he tried to get the golfer to concentrate on the next shot and not to worry about it -- although he wasn't sold on the idea that it wouldn't bother him.

"It has to,'' Austin Johnson said. "Now you've got seven holes to play in a major championship and you're not sure if you're going to get a penalty at the end of the round or not. As good as he is at shaking stuff off, I don't know anybody who wouldn't be thinking about it.

"I told him not to, and it looked like he did a pretty good job of it, but I was thinking about it. I couldn't help it.''

Whether Johnson committed a violation is now more complicated under the 2016 edition of the Rules of Golf, which came out in January following a four-year review cycle. Under the old Rule 18-2b (Ball Moving after Address), a player would have automatically been assessed a one-stroke penalty if the ball moved. Under the new Rule 18-2, a player will be penalized if the facts show he caused the ball to move.

Typically a player would then have to move the ball back, and Johnson did not do that. But he avoided a two-stroke penalty because at the time of the ruling, the official on the green told him he could proceed.

"Under that scenario, our rules official asked him if he grounded the club, and he said he didn't,'' Davis said. "But he did ground the club. Because it was a ruling made by our official, he's not going to get a two-stroke penalty for not replacing it. It's just a one-stroke penalty.''

USGA officials notified other players who were in contention, including Lowry, who was playing in the group behind Dustin Johnson. It was a confusing scenario for all concerned, including Johnson, because they could not be sure if he would be penalized or not.

"It didn't affect the way I played,'' said Lowry, who was tied as late as the 13th hole but played the final five holes in 3 over par and shot 76. "If anything, I credit Dustin for playing the way he played on the way in, having that hanging over him, because I probably would have wanted to know straightway if it was me.''

Johnson had another ruling on the 10th hole after he had hooked his drive well into the left rough. But between him and the green was a television tower, which is deemed a "temporary immovable obstruction,'' from which a player gets relief.

That nearest point of relief happened to be in the first cut of rough for the 11th fairway. Johnson hit his approach over the television tower anyway.

"The lie wasn't terrible, but it wasn't good,'' he said. "It was definitely a break to get out of the deep rough. The scoreboard and the camera tower was in my way. So under the rules, I get relief. For me to get to drop it in the first cut was definitely very nice.''

Johnson, who now has won 10 times on the PGA Tour, including at least once each of the past nine years, had had several close calls in major championships.

And it was a controversial rules decision at the 2010 PGA Championship that cost him a shot at that title. On the final hole, Johnson grounded his club in a fairway bunker, one that he and his caddie deemed to be dirt as it had been trampled over by spectators. The two-shot penalty kept him out of a playoff between Martin Kaymer and Bubba Watson.

"It definitely makes it sweet,'' Johnson said of his victory Sunday. "It's nothing new at this point -- it's happened so many times. I kind of expect it now. So for it not to affect the outcome is fantastic. It just shows how well I played.''