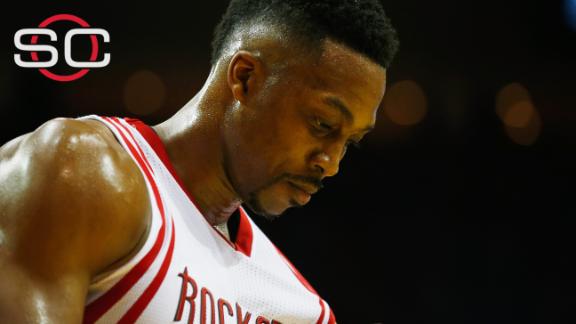 HOUSTON -- The NBA has suspended Houston Rockets center Dwight Howard without pay for Tuesday's game against the Miami Heat for swiping the arm of an official in Saturday's loss to the Washington Wizards.

Also, the league announced that Rockets interim coach J.B. Bickerstaff was fined $10,000 for his criticism of the officiating in that loss to Washington.

Howard was informed of his suspension during Tuesday's shootaround.

Howard was kicked out after tussling with Wizards center Nenewith 8 minutes, 8 seconds to play in the fourth quarter. After Howard and Nene were tangled up, they pushed each other. Referee Mitchell Ervin extended his arm to keep Howard at bay, but the Rockets center pushed the arm down and walked away as Nene yelled at him. Howard later apologized for pushing the referee's arm down.

The suspension comes after a source told ESPN that the NBA rescinded one of the technicals from Howard's record on Tuesday.Howard now has 11 technicals and is tied with Golden State'sDraymond Greenfor the league lead.

Bickerstaff was fined for his voiced displeasure with how referees handle Howard in the post. The Rockets believe some of the health issues Howard has endured this season -- sore back, nicked-up shoulder and elbow -- are the result of getting pounded in the paint. Howard said his shoulder popped out three times in Saturday's game and that as late as Monday it was still hurting.

Bickerstaff said the officials need to be held accountable for their failures to police the game against what he described as dirty play.

Bickerstaff did say he spoke to Howard about maintaining his composure on the court. He received his first technical foul for putting his hands behindJared Dudley'sneck. Howard said he was trying to demonstrate to the officials what Dudley was doing to him.

While both players were smiling, Howard received the technical. The second technical, which led to the ejection, was Howard being upset with arm bars that were holding him up inside.

"Stay composed knowing what the other team's intentions are and just can't allow little things to agitate me," Howard said after Monday's practice about his conversations with Bickerstaff.

Why Dwight Howard was suspended
ESPN Rockets reporter Calvin Watkins breaks down Dwight Howard's frustration this season and explains why the Rockets center could opt out of his contract.

Howard ejected again, Rockets lose again
Dwight Howard is ejected for the second straight game, and the Rockets' losing streak reaches three, despite 40 points from James Harden, in a 123-122 defeat at the hands of the Wizards.