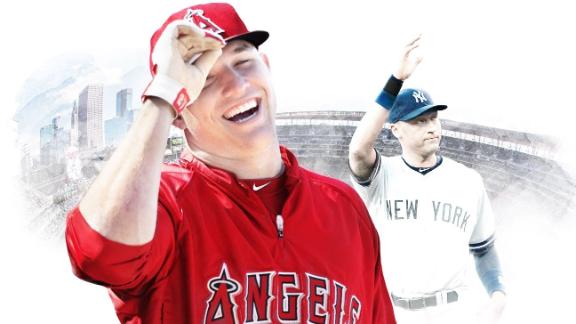 MINNEAPOLIS -- As the recent death of Tony Gwynn to salivary gland cancer continues to resonate in baseball circles, commissioner Bud Selig and players' association executive director Tony Clark both want Major League Baseball to make strides toward reducing and ultimately eliminating the use of smokeless tobacco in the game.

It remains to be seen if they can find the common ground necessary to make that goal a reality.

While Selig expects the subject to be part of negotiations toward a new labor agreement over the next two years, Clark on Tuesday expressed the hope that smokeless tobacco use among players will diminish through greater efforts to educate them on the health hazards. Clark said the union is open to discussing the issue in labor talks but wants the use of smokeless tobacco to remain a matter of individual choice and does not advocate an outright ban.

"We believe the numbers suggest that usage has declined significantly," Clark said. "It's declined in the minor leagues and the major leagues. Our hope is that we can continue to educate guys on the damage that dipping can do and they will continue to decide not to dip and chew.

Selig and Clark made their comments during an annual All-Star Game session with the Baseball Writers' Association of America. They also gave their thoughts on the state of replay, the recent spate of pitchers' arm injuries and numerous other issues affecting the game.

Gwynn, an eight-time batting champion and first-ballot Hall of Famer, died June 16 at age 54. He was diagnosed with cancer in 2010 and said publicly he believed the illness was caused by his longtime use of chewing tobacco.

Since Gwynn's death, Nationals starter Stephen Strasburg and Diamondbacks closer Addison Reed have said they plan to give up smokeless tobacco. Both pitchers played for Gwynn during his tenure as coach at San Diego State.

While smokeless tobacco is banned in the minor leagues, MLB opted for more modest restrictions with a series of rules enacted in 2011. Teams no longer provide tobacco to players, and players are prohibited from carrying tobacco cans in their uniforms or doing on-camera interviews while chewing.

The American Cancer Society, American Heart Association and seven other public health organizations recently wrote a letter to Selig and Clark advocating an outright ban, saying tobacco use "endangers the health of major league ballplayers" and "sets a terrible example for the millions of young people who watch baseball at the ballpark or on TV."

Both Selig and Clark said Gwynn's death took a personal toll and helped amplify their strong feelings on the need to eliminate tobacco use in the game. Selig said he gained major insight into the hazards of chewing tobacco from his surgeon at a New York hospital while being treated for melanoma 10 years ago. He spoke to Joe Garagiola, one of baseball's most vocal opponents of smokeless tobacco use, on the day of Gwynn's death.

"It will be a subject they'll discuss during the next collective bargaining," Selig said. "I understand that individuals have a right to make their own decisions. I hope we're successful, because the Tony Gwynn story was a heartbreaking, awful story.

"I feel very strongly about this, just as I did 10, 15 years ago. The one thing I personally assume as commissioner is that we're responsible for the health of our players. I believe that. Some may think that's naive, but I don't think so."

Clark also recounted his friendship with Gwynn during his 45-minute media session.

"Tony impacted all of us in different ways," Clark said. "I was very fortunate to grow up in San Diego and have the opportunity to watch him play, and I had the privilege of playing against him on the field. So there's a personal connection there. His passing hurt a lot of us.

"With respect to tobacco itself, there are a number of players who made a decision [to quit] as soon as Tony passed. It really smacks you between the eyes. But truth be told, it's a process, and it takes time for some guys to wean themselves off or make whatever adjustment they need to make.

"Everything is negotiable. We can have that conversation with Major League Baseball. But our hope is that the trend we've been on will continue and we can ultimately get to a place where [players] leave [tobacco] alone."