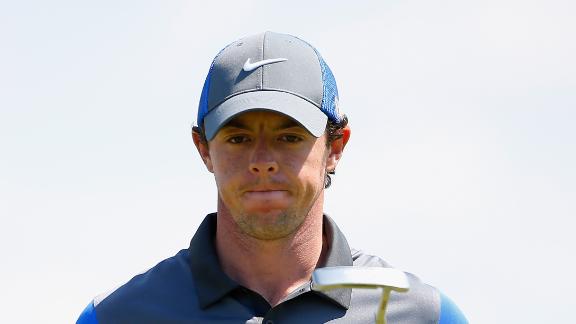 HOYLAKE, England -- Two-time Open champion Ernie Els limped through Royal Liverpool in a daze Thursday afternoon, shooting a 79 after hitting a spectator in the jaw with his very first shot of the tournament.

Els, 44, hooked his opening tee shot into the crowd, hitting a 60-something unidentified spectator who required medical treatment and was taken to a local hospital.

"I was thinking about him," Els said. "There's blood all over, and I was quite rattled. It wasn't nice.

"I was kind of finished, and then started missing short putts. It was a nightmare. So I'd like to put it behind me. I just hope the gentleman feels better, because he looked really bad when I left him there."

R&A officials said the man was admitted to the hospital with what was described as minor injuries. He was expected to be released, although there was no confirmation.

Els tweeted later Thursday that he spoke with the man.

Really tough day today. Just spoke to the gentleman I hit on the 1st and happily he's fine. Got him some tickets @The_Open this weekend.

- Ernie Els (@TheBig_Easy) July 17, 2014Els made a triple-bogey 7 on the hole that included a missed backhanded putt. He made just one birdie, and his 79 was his second-worst score in 87 Open rounds dating to 1992.

Els said he set up on the first hole to hit his tee shot toward the left. He wasn't trying to hit it in the gallery, but he did consider asking the marshals to move the crowd over, knowing that if the shot got away from him it could find people.

After hitting his drive, as the trajectory showed a hooking tee shot, Els signaled to the left to alert those ahead that his ball was heading into the crowd.

"I actually thought it was almost going left of the people, but I guess obviously not," he said. "It was right in the face. Anyway, you think the worst. It was like a bullet coming at him. So he must have been in total shock. He didn't look very good. So I did speak to him, and he wasn't feeling too good getting hit."

The other major champions in his group did not fare much better; Phil Mickelson shot 74 and Bubba Watson 76. The three players have combined for 11 major championships, but went 13 over on a day when nearly 50 players broke par.

"Yeah, I think I put the jinx on it," Els said. "Obviously I played the front nine in 7 over par, a perfect day, and that's just unheard of. I think I pulled them down a bit and we can play better tomorrow."

Watson had difficulty on the back nine, making a triple-bogey at the 11th hole and then getting flustered with the number of people in the group.

"It's my fault," said Watson, who won the Masters earlier this year but missed the cut at the U.S. Open. "Nobody else was having that problem, it was just me. And I just let it go on that one hole and it cost me dearly. If I focused a little bit there, I could hit a better shot and hopefully make a bogey instead of a triple. It's one of those things. It's all on me. It's just my fault. I asked my caddie a few times. I just never got focused or committed to that shot, like I should have been."

And Mickelson, the defending champion, hit his second shot out of bounds on the 18th hole -- one of two holes that has the unusual distinction of having interior out of bounds.

"Obviously I think it sucks," said Mickelson, who bogeyed the hole but was nonetheless encouraged by the way he hit the ball. "This is the best I've hit it in over a year, I had as much control over the golf ball as I've had in a long time. Whether it was working cuts into the wind, draws into the wind, shots off the tee. And certainly the score sucks, but my game is as good as it's been in a long time.

"I remember back in '04 at Troon, I shot 74 the first day on pretty benign conditions, came out the next day and shot 66 and got right back in it. And I feel like I'm more on that side of the equation, than having another round over par because I just think the way I'm starting to hit it and the way I feel with the putter is just totally different."

McIlroy Atop Leaderboard After First Round
Rory McIlroy shot a first-round 66 to take the lead after the first round of the Open Championship.