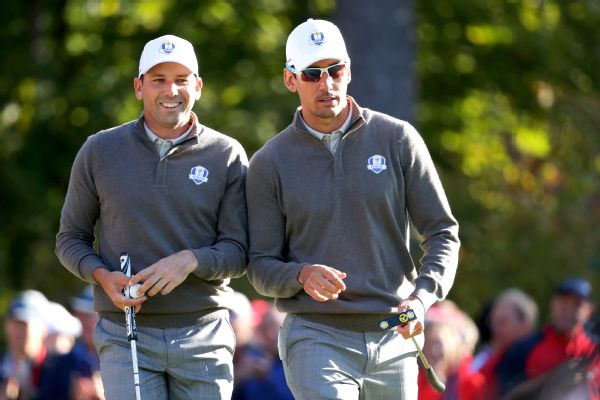 CHASKA, Minn. -- The United States saw its lead cut to 1 point, 6 to 5, after Saturday morning's foursomes session at the Ryder Cup.

The Europeans claimed 2 of the 4 points, capped by an unlikely tie achieved by Sergio Garcia and Rafael Cabrera Bello, who came back from 4 down with 6 holes to play against Patrick Reed and Jordan Spieth.

The tandem of Rory McIlroy and Thomas Pieters got the first point of the day for Europe, defeating Phil Mickelson and Rickie Fowler 4 and 2. It was the first time in four Ryder Cup matches that Mickelson lost to McIlroy but it was his 20th overall defeat, tying him with Jim Furyk for the most in U.S. history. Mickelson is now 17-20-6 in 11 Ryder Cup appearances.

Brooks Koepka and Brandt Snedeker turned a tight match into a 3 and 2 victory againstHenrik Stenson and Matt Fitzpatrick, winning three of the last four holes. That duo is now 2-0 for the Americans.

And Justin Rose and Chris Wood defeated Jimmy Walker and Zach Johnson 1 up.

The U.S led 4-0 after the Friday foursomes, 5-3 after Friday fourballs and now has only a one-point advantage with 4 fourball matches on Saturday afternoon.

Koepka and Dustin Johnson take on McIlroy and Pieters; J.B. Holmes and Ryan Moore go against Danny Willett and Lee Westwood; Mickelson and Matt Kuchar are playing Garcia and Martin Kaymer; and Reed and Spieth are back out for the fourth time against Rose and Stenson.