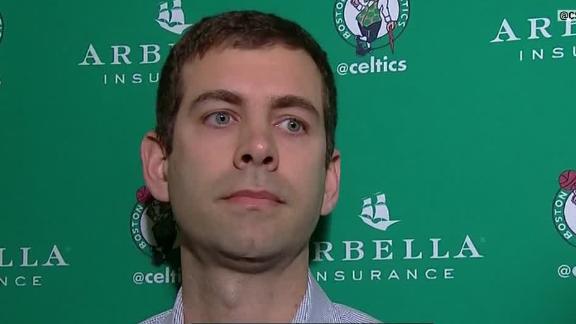 FormerButlerbig man Andrew Smith, a key player on Brad Stevens' two teams that went to the national title game, died Tuesday after a lengthy battle with cancer. He was 25.

His wife, Samantha, confirmed his passing via Twitter on Tuesday afternoon. Butler also released a statement.

The 6-foot-11 Smith was a freshman reserve on the 2010 team. He started as a sophomore on the 2011 squad and averaged 8.5 points and 5.6 rebounds per game. Smith scored five points and grabbed nine rebounds in Butler's loss toUConnin the title game. He spent two more seasons at Butler, then played professionally in Lithuania. He returned home to Indianain 2013 and was diagnosed with non-Hodgkin lymphoma in January 2014.

Smith appeared to be improving and went to work for a local company, Mina Leasing and Financial Services. However, just a few days into his new job, on July 31, 2014, he went into cardiac arrest and spent three days in a coma. Smith had a bone marrow transplant in November, but on Dec. 7, Samantha Smith wrote that the transplant had failed and the lymphoma had turned into leukemia.

Smith's former college coach, Brad Stevens, who has coached the Boston Celtics since the 2013-14 season, did not attend his team's game Thursday in Chicago. Instead, he went to visit Smith in the hospital in Indianapolis. Stevens tweeted his reaction to Smith's death.

"The last week's been tough," Stevens said. "I was happy that I got a chance to say goodbye. And this is really about, when you coach somebody, you get a lot more out of coaching them than they do from you. And that's that. I could go on and on, and it wouldn't do him justice.

"[Smith] was special. He was tough," Stevens added with his voice cracking. "He set a great example."

Stevens said he planned to return to Indianapolis to attend Smith's funeral. He expressed appreciation to the Celtics for giving him the flexibility to be there and to take last week's visit before Smith's passing.

"I'm glad I got a chance to go back last week, and I'm really appreciative of the Celtics and ownership for letting me do that," Stevens said.

Smith's father, Curt, issued a statement on his son's death: "Andrew packed more living into his 25 years than most of us will enjoy in a full 75 years. He lived his faith, relished his family, selflessly served his wife, and pursued his passion of basketball at the highest levels."

He added: "We have seen many miracles in Andrew's life, including surviving 22 minutes without a heart beat with no side effects and his initial response to the chemo when first diagnosed with this pernicious disease called acute lymphoblastic lymphoma. But we have to count that run to the Houston Final Four among the most amazing miracles in Andrew's short but full life."

Among the tributes to honor Smith on Tuesday was the moment of silence the Pacers held before their game against Phoenix.

Ronald Nored, Smith's teammate on both of Butler's national runner-up teams, spoke about being able to visit Smith last week.

"I'm heartbroken by the news. He was an amazing friend and teammate," Nored told ESPN.com. "He is truly an inspiration. When I played with him and when I saw him in the hospital Friday, there was such a light and radiance about him that captured me and so many others."

Smith starred at Covenant Christian in Indiana but wasn't heavily recruited. He left Butler as one of three players in school history to score more than 1,000 points and win more than 100 games.

"The passing of Andrew Smith is a profound reminder to all of us as to the precious little time we have on this Earth," Atlantic 10 commissioner Bernadette McGlade said in a statement. "On behalf of the Atlantic 10 Conference, I extend our deepest sympathy to the Smith family and the Butler University athletic family as well."

"The Butler community is profoundly sad today with the news of Andrew's passing," the school said in a statement. "We saw the way Andrew fought on the basketball court and we saw the way he fought for his health. In both cases, we saw the best of Andrew Smith. But that's what we always saw from Andrew. He gave his all, all the time.

"As an Academic All-American, he represented the best of Butler in the classroom and on the court. Above all else, what made Andrew special was the way that he genuinely cared for others. Within his large frame was an even larger heart. He is, was, and always will be a Bulldog. The Butler community is proud to have been part of his life, and our thoughts are with his wife, Samantha; his parents, Debbie and Curt; and the rest of his family."

Stevens addresses death of Andrew Smith
An emotional Brad Stevens discusses the relationship he had with former Butler center Andrew Smith, who died at age 25, saying "I could go on and on and it wouldn't do him justice."