Garbine Muguruza confident she can beat Serena Williams at Wimbledon 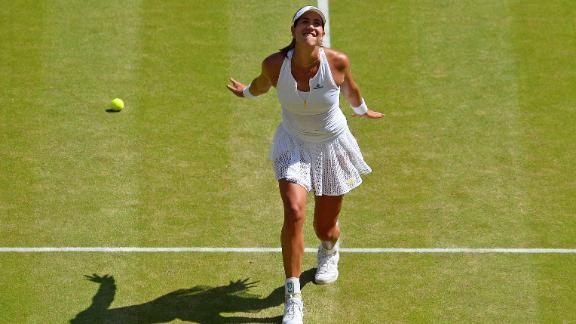 LONDON -- Garbine Muguruza knows she can beat Serena Williams on the big stage. After all, the Spaniard, then 20 years old, handed the now 20-time major champion her most lopsided loss ever at a Grand Slam tournament.

On Saturday, Muguruza will again go up against Williams, but this time in the Wimbledon final.

"She knows that I can win against her, that I'm not afraid," said Muguruza, who beat Williams 6-2, 6-2 in the second round of last year's French Open. "I don't think she's really used to this. Serena, she doesn't lose so many matches in the year."

Williams, actually, hasn't lost many matches since that day in May 2014. And at major tournaments, she's lost only once since then, in the third round at last year's Wimbledon.

The top-seeded American is now one win from completing a second "Serena Slam" -- winning all four Grand Slam tournaments in a row. If she pulls off a sixth championship on Centre Court, the 33-year-old Williams will just have the US Open left to complete the first calendar-year Grand Slam since Steffi Graf did it in 1988.

Williams has beaten Muguruza once since that day on clay in Paris, eliminating the Spaniard from the fourth round at this year's Australian Open. But even that match went to three sets, with Muguruza winning the first.

"We had a tough match the last time we played. And she's given me problems in the past," Williams said Thursday after beating Maria Sharapova for the 17th time in a row. "So this time I have to just go in it ... and do the best that I can, just try to stay positive and stay focused."

Muguruza, now 21, took some time Friday to reveal some things about her personal life, saying she likes to cook, listen to her music on shuffle and watch movies at home while spending downtime with her family.

And while she mentioned over and over again that she wasn't superstitious, she also made clear that she didn't want to make any drastic changes in her preparations before Saturday's match. That includes the possibility of her mother and father coming to southwest London to watch the match.

"My parents, they're going to be in Barcelona watching me from the TV. I don't want to change anything," Muguruza said, then breaking into a big smile, "but I'm not superstitious."

Muguruza: 'It's like a dream'
Garbine Muguruza looks ahead to the Wimbledon final.