GM intends to keep Cavs intact: 'Best basketball's in front of us' 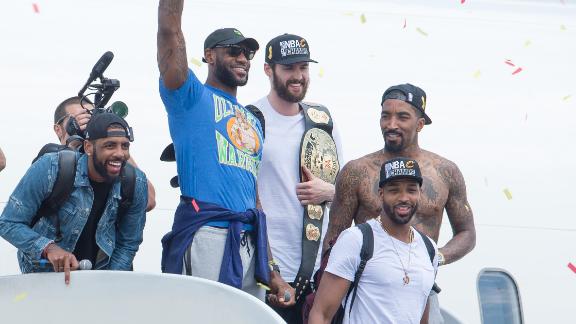 Cleveland Cavaliers general manager David Griffin, in an interview with the "NBA Lockdown Insiders" on ESPN Radio, said the franchise enters free agency this week looking to change as little as possible about the roster.

"We do intend to keep this group together and see what we're capable of," Griffin told the show.

Griffin's comment, after rampant speculation about the future of power forward Kevin Love while Cleveland was slipping into a 3-1 hole before rallying against the Golden State Warriors in the NBA Finals, would appear to suggest Love will not be made available to interested trade suitors this offseason.

"I think our best basketball's in front of us because we finally organically grew to the point that we were ready to achieve something together," Griffin said. "And so I expect you're going to see better play from Kyrie Irving, who I think took a huge jump both as an individual talent and a winner throughout these playoffs. [And] I think Kevin's fit with us is much more clearly defined."

The Cavaliers have six free agents -- including face-of-the-franchise LeBron James, who is expected to opt out of the final year of his contract. James was adamant in a recent interview with ESPN that he's going nowhere, saying, "I love it here in Cleveland. I have no intentions of leaving. There are some technicalities to take care of [that] I'll leave up to my agent. That's right from the horse's mouth."

J.R. Smith, Matthew Dellavedova, Timofey Mozgov, James Jones and Dahntay Jones are Cleveland's other free agents, while key reserve Richard Jefferson, 36, is deliberating about whether to play one more season, which would be his 16th, after admitting in the wake of the championship that he's contemplating retirement.

"We've been really fortunate," Griffin said. "Ownership has really invested in this group to such a huge degree, and when we were the largest taxpayer in the league last year -- and I think the second highest ever -- there were times during the year where I felt really, really bad about spending that much of their money. But I do think that you saw that the core of our team, it fits together. It's capable of doing some very special things, and I do think we would like to keep it together."

In a Monday interview with SportsCenter after being officially named to the Team USA roster, Irving said, "I know that [Griffin] has a belief in what we've created here in Cleveland, and I know he wants to continue it so we're very lucky we have great management as well as an ownership that's willing to do anything possible to win championships."

Reflecting on what the past week has been like since the Cavs' first championship in franchise history, Irving said, "It's been amazing, understanding what myself and my teammates, what we did and the way we did it. I don't think it's necessarily set in for us completely yet, but I'm just ready here to relish an opportunity to play with a great team like this [for the] USA, and it's a dream come true for me to be on a team like this. I've been dreaming of this since I was a kid, and to have the opportunity to win an NBA championship as well as go for gold, it's amazing."

Playing for Team USA in Rio will reunite Irving with his college coach, Mike Krzyzewski, under whom Irving won MVP awards at the 2014 FIBA World Cup in Spain.

James and Love turned down their own invites to play for Team USA this summer, opting instead for rest after such a long season, but Irving has no reservations about getting back on the floor so soon.

"They already have gold medals, so they've been a part of this USA experience for a little bit longer than I have," Irving told SportsCenter. "You know, for me, it was just about coming here and playing with a lot of great guys. It would have been great to have Kevin and Bron and us go for gold, but it's about the guys we have here and us coming together as a team and being ready to compete in Rio."

Said Griffin: "I was happy for Kyrie. I know he and Coach K have a special relationship, and I was certain that Kyrie was going to play throughout. If you had told me Kyrie was going to take time off to rest, I would have been fine with that as well. But USA Basketball has been really good for him. He's grown a lot through those experiences, he's become a better player, he's become a better leader and I think it's something that will just continue because that program is so good."

Reflecting more on the past week, Irving said, "I think it's just an exciting time, for not only the players but as well as for Cleveland. I mean the parade that we had, [we] had 1.3 million people, which was unbelievable in terms of sports history. I know Cleveland; we've been in a little bit of a drought for 52 years, and I'm glad we're out of it now. And now we get to celebrate, enjoy for as long as everybody wants to, but for me, I have a little bit of a short celebration time.

"It's just really about being with the people I love and knowing that they care and understanding that the times that I was telling them that this was going to be the hardest thing I've ever done, we got it done. And the way we did it was special."

ESPN's Dave McMenamin and Brian Windhorst and Saad Yousuf of ESPN Radio in Dallas (103.3 FM) contributed to this report.