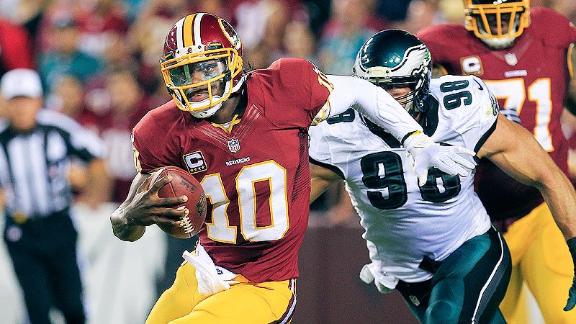 RICHMOND, Va. -- Washington Redskins vice president and general manager Bruce Allen said quarterback Robert Griffin III should not have opened the season as the starter a year ago, not because his knee wasn't ready but rather because of his game.

Allen, speaking on ESPN 950 radio Monday, said Griffin, coming off knee surgery to repair multiple ligaments, did not have enough practice time to get ready for an NFL season. Though doctors cleared him to resume practicing, then-coach Mike Shanahan said Dr. James Andrews told him he should not play in any preseason games.

Griffin eased his way back into the lineup, working alone and off to the side during practices while wearing a brace on his right knee. He started taking first-team snaps in mid-August, near the end of training camp. By then, with preseason games underway, the Redskins' work weeks were interrupted by exhibition games. That limited his number of practices.

"What you saw last year was almost a little disrespectful to the game of football," Allen said. "It's impossible to ask a player to perform well during the regular season if you haven't practiced.

"Last year at this time, he was still rehabbing his knee, and he wasn't allowed to practice or work in team drills. We put him on the spot by trying to do that. And this year he's had a full offseason, his knee is 100 percent, knock on wood, and he's had all [the practices], and that's how you get ready to play a football season."

Griffin was coming off a magical first season when he helped the Redskins win their first NFC East title since 1999, but late in the season he injured his lateral collateral ligament during a December win over Baltimore, missed a week and then tore his ACL and MCL in a playoff loss to Seattle.

He embarked on a campaign to return for the opener with a slogan of "All in for Week 1."