ESPN
By Scott Burnside
SAN JOSE, Calif. -- When talking to San Jose Sharks goalie Martin Jones, you to want to quietly hold out a mirror in front of him to see if it fogs up; to check, if not for signs of life, at least signs of emotion.

Good luck with that, by the way.

With the Sharks' season riding on scoring the next goal on Saturday night in overtime of Game 3, Jones was the same as he might have been in warm-ups or last week or the week before or maybe three years ago, while he was taking a nap on a sunny day.

"Yep. I mean, I think that's why I have a routine, to kind of feel comfortable in those high-pressure games and moments," Jones said after Joonas Donskoi snapped home arguably the biggest goal in Sharks history 12:18 into overtime to beat the Pittsburgh Penguins 3-2 on Saturday. "So yeah, nothing changes for me."

The win carved the Penguins' series lead to 2-1, with Game 4 set for Monday night (8 ET) in San Jose.

It does not take a rocket scientist to figure out the difference between being down 3-0 and 2-1 in a series.

But don't think for a minute that the undrafted 26-year-old Jones ever thought about it. Never thought, Oh boy, if I let in the next goal, we're cooked.

In fact, he looked rather horrified when we asked him if that occurred to him.

It's been a fascinating finals series thus far. All three games have been decided by one goal. Two have gone to overtime, but for much of the series, it has seemed as though the Penguins have been sitting at the big folks' table, while the Sharks were at the kids' folding table nearby.

The Penguins have mauled the Sharks in the shots department, outshooting them 42-26 in Game 3 and 113-74 in the series.

But here's another thing Jones doesn't worry about: whether his club is getting clobbered in that category.

"No," Jones said. "That's kind of just the way they play, they throw pucks from all angles. We're not too worried about the shot clock."

Apparently the list of worries for Jones -- who was the backup to Jonathan Quick when the Los Angeles Kings won their Stanley Cup in 2014 -- is not lengthy.

We are told by a reliable source that this season Jones once slammed his stick in frustration during a Sharks practice. It was seen as a breakthrough moment by the coaching staff, although some players still wonder if it actually happened.

"I've never seen anything like that. Even in practice. Outside the rink. In goal. He never shows any frustration. I don't think it's [because] he doesn't show it, I don't even think he even gets frustrated. He's just that calm of a guy."

It's probably fair to say that not many jittery, nervous goaltenders prone to freaking out get to the Stanley Cup finals.

But the fact of the matter is we are witnessing two immaculately calm, young netminders battling for the right to have their name inscribed on the Stanley Cup this spring, and they have absolutely no reason to be so calm.

Jones' counterpart in the Penguins' net, Matt Murray, is more emotive off the ice (OK, Jones sets that bar pretty low), but both have shown an uncanny ability to stare down moments that reduce far more experienced players to knee-knocking messes.

Both goaltenders gave up a goal Saturday they'd like to have back; Jones mishandled a dump-in that turned into Ben Lovejoy's game-opening goal and Murray allowed a hard shot from inside the blue line by Joel Ward to tie the game at 2 midway through the third period.

"Yeah, that was a bit of a weird one," admitted Murray, who turned 22 just before the finals and who began the season in the American Hockey League.

"His release point was a little bit further back than most slap shots are and it kind of dipped a little bit at the last second, and I just waved at it and missed it. It's not a good goal by any means, but I thought I made a couple good saves after that."

In Game 3, though, it was Jones who was rewarded for being a lot busier and maybe just a little bit better than Murray, stopping all nine shots he faced in overtime to earn his first career postseason OT victory after losing four straight this spring.

So, where does that come from? "God-given talent."

In the next few days, one of these cool-as-a-cucumber young men, whose past suggested none of this was likely a few months ago, will have his name inscribed on the Cup.

It will be a great story, whichever way the inscriber ends up going.

But the fact the inscriber isn't already starting on "M-U-R-R-A-Y" is due in large part to J-O-N-E-S, the man whose name may not rhyme with ice, but who apparently has it running through his veins. 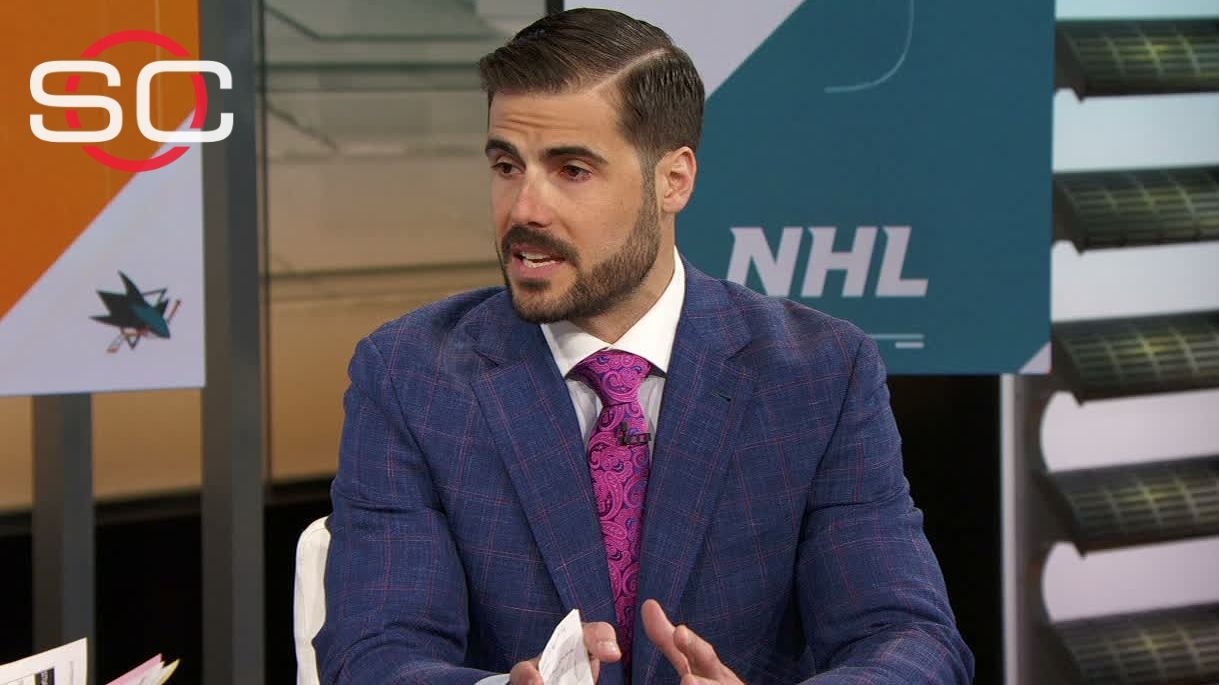 DiPietro: Jones giving Sharks confidence
Rick DiPietro explains how Sharks goaltender Martin Jones' calm demeanor and great netminding has contributed to San Jose so far in the Stanley Cup finals, as well as how captain Joe Pavelski is contributing to the team without filling up the stat sheet.

Sharks take Game 3 with Donskoi's OT goal
The Sharks fight their way back into the Stanley Cup finals with a 3-2 overtime win over the Penguins in Game 3.