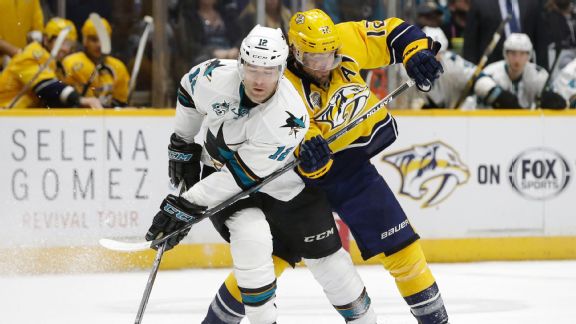 After outbidding a handful of teams and signing Russian free-agent center Vadim Shipachyov to a two-year, $9 million contract last week, Vegas Golden Knights general manager George McPhee told ESPN.com that he hopes negotiating the first one-way NHL contract in team history "is the start of a lot of good things."

Given that he has $68.5 million in salary-cap space (and $49.5 million to spend to get to the cap floor), McPhee will need to keep his cell phone fully charged between now and June 17, when the league's 30 other teams must turn in their list of protected players for the June 21 expansion draft.

McPhee's signing of the 30-year-old Shipachyov, who led the Kontinental Hockey League with 50 assists and was third in scoring with 76 points in 50 games, could give the Golden Knights an inside track on St. Petersburg teammates Ilya Kovalchuk and Evgeny Dadonov, both of whom are contemplating a return to the NHL.

"We're not fooling around here," McPhee said. "We hired an outstanding staff and we're going to do the same thing with players -- getting good, quality people -- and build a winner. I don't know what we're going to look like, but what I'd like to have is a team that has everything -- talent, depth, size, grit, speed, all of that. Can we do it all in Year 1? I don't know, but we're going to try."

Here are four teams that might try to entice McPhee to either take -- or, in some cases, not take -- their players leading up to the expansion draft, for which every team can protect seven forwards, three defensemen and one goaltender; or eight skaters (forwards and defensemen) and one goalie:

GM David Poile will have $17 million in cap space this summer, but much of that will go to restricted free-agent forwards Ryan Johansen, Viktor Arvidsson, Austin Watson and, perhaps, veteran unrestricted free-agent center Mike Fisher. To make room, the Predators might want the Golden Knights to take either forward Craig Smith (3 years, $4.25 million per) or Colin Wilson (2 years, $3.94 million per) off their hands. If McPhee can get an extra draft pick or two, he might be willing to make a deal.

WingerScott Hartnell is an established locker-room leader, but after his production dipped from 23 goals and 49 points in 2015-16 to 13 goals and 37 points this season, will the 35-year-old be worth the $4.75 million he'll make in each of the next two years? Hartnell has a no-movement clause, but the Blue Jackets have three promising centers --Alexander Wennberg, William Karlsson and Matt Calvert-- whom they'd like to protect. If McPhee passes on Hartnell, an additional draft pick from Columbus might be enough for him to take Calvert instead of Wennberg or Karlsson in the expansion draft.

With defensemen Ryan Suter, Jared Spurgeon and Matt Dumba likely to be protected, the Wild could lose one of their impressive bottom three blueliners -- Jonas Brodin (4 years, $4.16 million per), Marco Scandella (3 years, $4 million) or Christian Folin, a restricted free agent. Would the Wild be willing to give up forward Jason Zucker (1 year, $2 million) to protect one of those defensemen?

San Jose is another team staring down the barrel of the salary cap. With eight roster openings and just $18 million in projected cap space, the Sharks need to decide what to do with popular free-agents-to-beJoe Thornton and Patrick Marleau. Each of them is 37 years old, and together they took up $13.4 million in cap space. Looking ahead, the Sharks are one year away from needing to sign defenseman Marc-Edouard Vlasic and goaltender Martin Jones to long-term deals. Would they look to trade the negotiating rights to Thornton or Marleau to Las Vegas, creating an instant Pacific Division rivalry?

McPhee said he will meet with his pro scouting staff on Monday and will begin returning calls to rival general managers after that meeting.