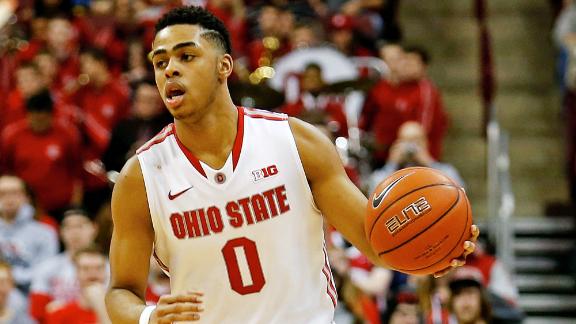 Jackson called Russell "a great-looking kid" and a "great prospect" last week while in attendance at the Ohio State-Nebraska game, according to Cleveland.com. The NBA prohibits team and league officials from publicly commenting on amateur players who have not declared for the NBA draft.

This is the second fine related to Jackson as Knicks president. He was fined $25,000 by the league for tampering with then-Oklahoma City Thunder guard Derek Fisher.

Before he hired Fisher as Knicks coach, Jackson said he was "a person that's on my list of guys that could be very good candidate for this job."

League rules prohibit teams from direct or indirect expressions of interest in other teams' impending free agents. At the time of Jackson's comments, Fisher was still an active player and pending free agent.

Jackson was at Ohio State last week to scout college players, presumably Russell in particular, as the Knicks are expected to have a top pick in June's NBA draft.

At 12-47, the Knicks have the worst record in the NBA. The team that finishes with the worst record has a 25 percent chance of landing the top pick in the draft lottery. That team is also guaranteed a top-four pick.

Yahoo! Sports had earlier reported that the league had fined the Knicks.