Henrik Stenson, Dustin Johnson each shoot 65 in Round 1 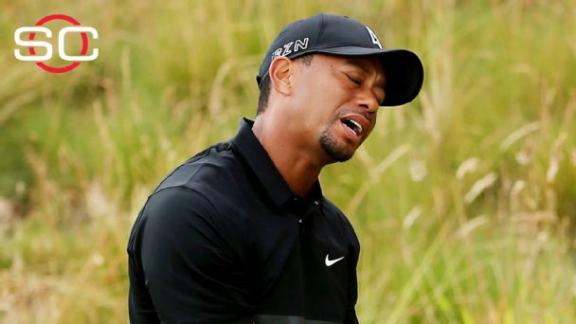 UNIVERSITY PLACE, Wash. -- One mystery was solved Thursday in the U.S. Open.

Chambers Bay can be as hard as the USGA wants it to be. Henrik Stenson and Dustin Johnson shared the lead at 5-under 65, and the other 23 players who managed to break par in a gentle debut of the new golf course off Puget Sound agreed that it likely will only get tougher the rest of the way.

Stenson posted his lowest score in the U.S. Open.

Johnson was flawless and powerful. His only mistake came on his final hole when he pulled a 6-iron on the par-3 ninth over the green and made his only bogey. Stenson, among those cynical of Chambers Bay when he first saw it, birdied four of his last five holes. He poured in a 25-footer on the 18th for his 65.

Stenson and Johnson had a one-shot lead over Patrick Reed.

On the opposite end of the leaderboard sat Tiger Woods and Rickie Fowler.

Playing in one of the later groups, Woods shot a 10-over 80 that concluded with him topping a 3-wood from the fairway. It was his third round in the 80s this year, and he wasn't even the worst in his own group. Fowler shot an 81. For both, it was their highest score in a U.S. Open.

Despite their disastrous rounds while part of a group that also includedLouis Oosthuizen, both Woods and Fowler attempted to lighten the mood.

"At least I kicked Rickie's butt," Woods said with a forced smile.

"I think we're happy just to be upright, alive and moving on with the day," Fowler said.

Matt Kuchar, Ben Martin and Brian Campbell, the amateur who just finished his college career at Illinois, were at 67. In the group one shot behind was Masters champion Jordan Spieth, a 21-year-old Texan who has been around long enough to know that anything around par is considered good work at a U.S. Open.

"I think if I did it three more times, I'd be in really good position come Sunday," Spieth said. "No complaints there."

The morning groups were happy to get the first date with Chambers Bay out of the way.

"One day out of four done, and we're right there with where we want to be," Stenson said. "It's still a long journey until Sunday afternoon."

It's a long journey every round at Chambers Bay, the mystery course built on a former sand-and-gravel pit with 200 feet of elevation from the highest point to the train tracks that run along Puget Sound.

The course was always going to be the star in the opening round because no one knew what to expect. The USGA allowed for a relatively gentle setup, and the overcast sky and lack of wind certainly helped.

Several tees were moved forward. Several pins were in spots where the slopes could be used to get the ball close. Complaints -- except for the greens -- were at a minimum.

"My guess was there would be 20 to 30 guys under par after today, and by the end there will be barely any," Geoff Ogilvy said after his 69. "With a course like this, I would have thought that would be a sensible strategy to keep us all happy on Thursday and then gradually wear us down."

Phil Mickelson showed early that he might be in the mix for another shot -- or more heartache -- in the only major he has never won. He was among the early leaders until back-to-back bogeys in the middle of the back nine for a 69.

"I thought there was nothing hokey or crazy with any pin positions or how it played," Mickelson said. "I thought it was difficult. I think the biggest challenge is that the green speeds are different from green to green. That's going to wreak havoc on our touch."

Rory McIlroy failed to take advantage of the early start. The world's No. 1 player hit the ball beautifully for most of the day and couldn't make a putt. He wound up with a 72.

Stenson was among those who were skeptical about Chambers Bay, which opened only eight years ago. Slowed by a stomach virus in the spring, he flew to Seattle on his way to the Match Play Championship and decided to walk the course to get a feel for how it played. It is faster now, and much firmer, and he thrived on it.

So did Johnson, no stranger to great starts in majors.

Johnson lost a chance to win the U.S. Open at Pebble Beach five years ago with an 82 in the final round. He missed out on a playoff at the PGA Championship that same year by grounding his club without realizing he was in a bunker at Whistling Straits. And his challenge at the British Open in 2011 was derailed by a 2-iron that went out of bounds on the 14th hole.

But coming off a six-month break to get his life in order, Johnson is as imposing as ever. He likes the look of a big course where he can smash his way around it, and hitting it straight always helps.

He surged into the lead with three birdies in a four-hole stretch, only to make bogey on his final hole. It didn't bother him. Nothing does.

"I really felt like I swung it well and hit a lot of quality iron shots," Johnson said. "So the confidence is definitely there. I feel really good about where I'm at going into tomorrow."