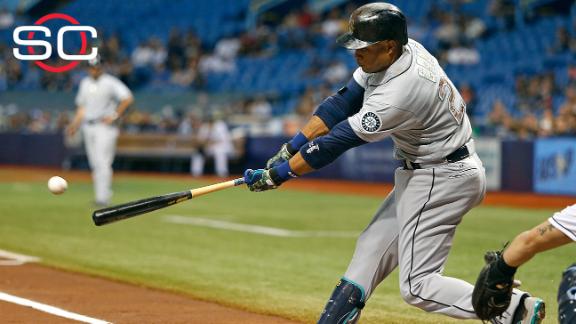 Seattle Mariners second baseman Robinson Cano has seen his batting average slide to .246 and has just two home runs this season, and hitting coach Howard Johnson has an idea why.

Cano, who signed with the Mariners last year for $240 million, is pressing and just needs to relax and use the whole field, Johnson said.

"He's a proud guy and when things got off a little slow for him, it's easy to press, even out here in Seattle," Johnson told reporters before Seattle's 7-2 loss against the Yankees on Monday.

"I think when you are used to hitting the ball out of the ballpark -- guys want to hit the ball out, they got numbers and stuff, people expect that and the human-nature side -- you start to try to go for that as opposed to doing the things you did when you were successful: That's be a good hitter first and home runs will come later."

Cano, who hit .314 last year in his first season with the Mariners, doesn't agree with the assertion that he's pressing, but he admitted that the bad start is troubling him.

"It doesn't feel good," said Cano, who had a .309 average and averaged 23 home runs during his nine seasons with the Yankees. "I wouldn't say I'm pressing but as a player you want to get a hit every single at-bat."

He later added: "I'm not going to overthink this."

Mariners manager Lloyd McClendon hopes Cano and the Mariners (24-27) can snap out of their season-long funk.

"The fact is that if Robby Cano, [Nelson] Cruz and [Kyle] Seager don't hit, then you are not going to win," McClendon told reporters. "If they continue not to hit, then you will be talking to somebody else. I'll be driving a garbage truck."