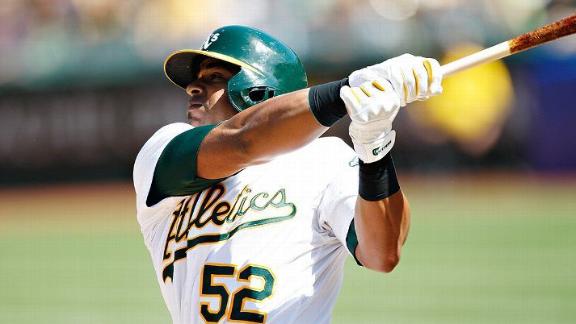 One-hit wonder? Not Yoenis Cespedes -- at least not if he has anything to say about it.

The Oakland A's outfielder, last year's Home Run Derby winner, told the San Francisco Chronicle on Wednesday that he is planning to defend his title in this year's derby on July 14 at Target Field in Minneapolis.

A's general manager Billy Beane had expressed reservations before the season about Cespedes participating again in the derby, citing the risk of injury. Cespedes missed time with a wrist injury after last year's derby.

Manager Bob Melvin concurred on Wednesday, telling the Chronicle "there's always some trepidation whenever a team has a player doing that." Still, he said, "It's his decision, we understand that."

Cespedes might have a chance to compete against fellow Cuban, Los Angeles Dodgers outfielder Yasiel Puig. The American League side is captained this year by Toronto Blue Jays outfielder Jose Bautista and the National League by Colorado Rockies shortstop Troy Tulowitzki. The captains will select their league's other four derby participants.

Tulowitzki said this week that Puig is on his list for consideration.

"If he chooses me, I absolutely welcome it," Puig told the Los Angeles Times through an interpreter, "but it doesn't matter to me whether I play or not."

Cespedes told reporters through an interpreter after last year's derby that he thought he would be able to beat Puig in the competition, calling Puig "not really a home-run hitter."

"This is not the type of competition he would excel at ... I would definitely win," Cespedes said then.

Puig took the challenge in stride when asked about it by the Los Angeles Times on Tuesday.

"Everybody has their own opinion," he told the newspaper. "That's his opinion. It doesn't bother me."