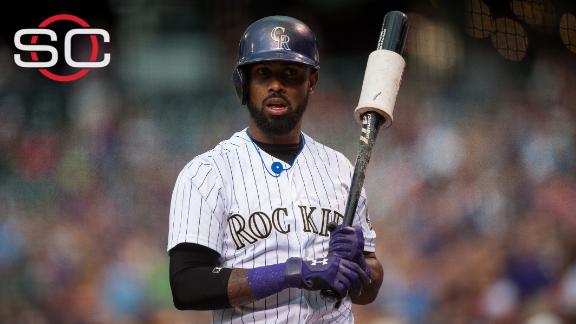 NEW YORK -- Nostalgic New York Mets fans may fondly recall a decade ago, when the youthful David Wright and Jose Reyes led the club to within a game of the National League pennant.

Now, the 33-year-old Wright may be nearing surgery to address a herniated disk in his neck.

And a reunion with the 33-year-old Reyes, who was designated for assignment by the Colorado Rockies on Wednesday, has virtually no chance of materializing, a Mets source said. That's the case even though the team has been depleted by injuries, particularly to the infield.

Reyes technically is not a free agent just yet. But the Rockies have no plans to play him again. By designating Reyes for assignment, Colorado has as long as a week to trade him. Once that period has passed, Reyes presumably will go on waivers for the purpose of releasing him. After he clears waivers, any team may pick up Reyes for just a prorated portion of the MLB minimum salary ($507,500).

Still, given Reyes is returning from a suspension for violating the league's domestic violence policy, there is now considerable baggage that will deter teams from considering him. Couple that with a decline in performance in recent years and Reyes may have difficulty landing a job.

If those reasons weren't disqualifiers enough for the Mets, a move also would require a position change for Reyes. Or multiple position changes. Reyes could man second base, with Neil Walker sliding over to third to plug the vacancy for Wright -- provided Walker's balky back improves and allows him to return soon. But if the Mets were inclined to do that, they probably would have promoted Dilson Herrera from Triple-A Las Vegas by now.

Manager Terry Collins nonetheless fondly recalled managing Wright and Reyes at their peaks, before the latter departed for a massive free-agent deal with the Miami Marlins following the 2011 season. Collins recalled how bubbly both Wright and Reyes were in the clubhouse during their primes.

"I thought they'd be here a long time," Collins said. "I thought Jose would be here many, many years. I think it's a tribute to the kind of players this organization looks for. This is a hard game to play. This is a real hard game to play in this city. And when you walk in the clubhouse every day, you see David Wright sitting in the corner with a smile on his face. And then you turn to Jose, and nobody had a bigger smile than him -- every day, 0-for-4, 0-for-10, 10-for-10. Same guys. So you need those guys. When we lost Jose, I thought, 'Boy, this is a major piece gone.' His energy to play the game, his love to play the game, his love to play the game in New York City, it's hard to find. It's hard to find those guys. We missed him.

"I don't know what's going to happen down the road. Certainly, I always root for him."

As for Wright's medical deterioration and what seems like impending surgery to address a herniated disk in his neck, Collins added: "He wants it resolved. He wants to move forward. Whatever it has to be, he's ready for it. That's why I'm sure he's looking forward to this decision that's going to come down from the doctors in California and here, and to get it resolved."

Difficult to deal Jose Reyes
Jerry Crasnick examines what will likely happen now that the Rockies have designated Jose Reyes for assignment, as well as whether there is a market for the shortstop who had been suspended under the league's domestic violence policy.
Related topics:
sportsespndavid wrightmlbdilson herreranew york metscolorado rockiesneil walkerjose reyes
Copyright © 2021 ESPN Internet Ventures. All rights reserved.
More Videos
From CNN Newsource affiliates
TOP STORIES