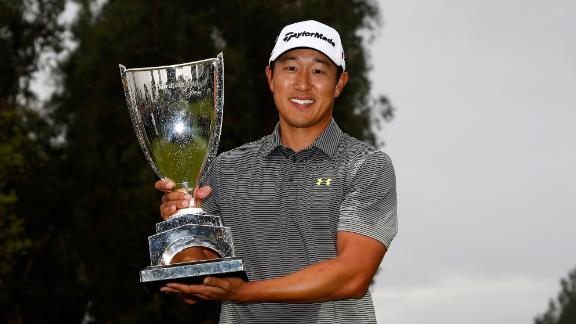 LOS ANGELES -- Surrounded by stars in the city and on the golf course, James Hahn turned in the performance of his life Sunday at the Northern Trust Open.

In trouble behind the 10th green at Riviera in a three-man playoff, he hit a flop shot over the back bunker and made a 10-foot putt to stay in the game when Dustin Johnson hit a shot that was even better. On the third extra hole, Hahn remembered the subtle break and holed a 25-foot birdie putt.

He was too nervous to watch Johnson try to match the birdie from 12 feet.

And he was too stunned to dance.

By closing with a tough par for a 2-under 69, and making two birdies in the playoff, Hahn captured his first PGA Tour title and earned his first trip to the Masters.

Until Sunday, he was best known as the guy who did the "Gangnam Style" dance before the crazies on the 16th hole at Phoenix. On Sunday, he was amazed and humbled at what hit him at Riviera just as the Academy Awards was getting started.

His story is fit for Hollywood.

Hahn once sold shoes at a high-end department store to make a living. He was on the verge of giving up on golf in 2008 when he was down to his last $200 and decided then to work a little harder. And then he won a PGA Tour event in a playoff over Johnson and Paul Casey, weaving his way through traffic on the back nine in which seven players had at least a share of the lead.

"I never would have thought I would win this tournament," Hahn said.

It looked like it would belong to so many others.

Johnson, in his third tournament back from his six-month break for "personal challenges," had gone 21 holes without a bogey and was tied for the lead with Sergio Garcia with a lob wedge for his third shot to the par-5 17th. He hit into a bunker and made bogey and then narrowly missed a 10-foot birdie putt on the 18th to win it. He shot 69.

Casey made a late surge only to bogey the last hole for a 68. Hahn joined at 6-under 278 with a tough up-and-down for par on the 18th, not even realizing it would be enough to get into a playoff.

Garcia was playing the 17th behind them and had a one-shot lead, but the Spaniard three-putted from 50 feet on the fringe for a bogey, and then chipped weakly to 25 feet on the 18th for another bogey and 71.

"I've always been truthful to myself and I didn't deserve to win this week. It's as simple as that," Garcia said.

Jordan Spieth, who four-putted from just off the green at No. 4, thought he needed to be at 7 under to have a chance and nearly chipped in on the 18th. But it ran 6 feet by the hole, and he missed that one for a bogey and a 70 to finish one shot out of the playoff. So did Hideki Matsuyama (67) and Keegan Bradley (68).

So much went right for Hahn, and it was a long time coming for the 33-year-old from Cal, born in South Korea and raised in the Bay Area.

"Hats off to James, making a long putt like that," Johnson said. "I played with him all day, so I knew he was rolling the putter really well."

Three pars on the 18th in the playoff sent them to the 10th hole, which was 310 yards of trouble and terror. Casey had the best shot, a 3-wood in the collection area left of the green. He pitched to 15 feet. Johnson and Hahn were in the wet rough behind the green.

"I didn't think I would have the longest birdie putt after seeing where those guys were," Casey said. "But those guys played phenomenal recoveries, absolutely brilliant."

Hahn pitched to 10 feet, and Johnson followed him with a shot into 3 feet.

Johnson had the advantage again on the par-3 14th, the third extra hole, until Hahn poured in what turned out to be the winning putt.

He was even more excited about what happens next, and he wasn't talking about his first trip to Augusta National. His wife, Stephanie, is expecting their first child the week after the World Golf Championship at Doral. Even if Hahn stays eligible, he said he won't play.

First, he has to pick out a name for his daughter.

"I'm going to have to talk to my wife about 'Riviera.' I think that's a good name," Hahn said.

Retief Goosen, the 54-hole leader, held on as long as he could until a horrid stretch on the back nine. The 46-year-old South African, going for his first victory in nearly six years, went from the trees on the left to the trees on the right and made double-bogey on No. 13. He followed with two more bogeys. Only a pair of birdies at the end salvaged an otherwise miserable final round, and he closed with a 75.

Vijay Singh, who turned 52 on Sunday, was tied for the lead with a beautiful bunker shot to 10 feet on No. 10 for birdie. He didn't made another birdie the rest of the way, fell back with a bogey on the 15th as the rain started to pound Riviera, and then taking double-bogey on the par-3 16th. He shot 72.

Bae Sang-Moon also was tied for the lead until bogeys on the 11th and 12th holes. He closed with a 72 and tied for eighth.