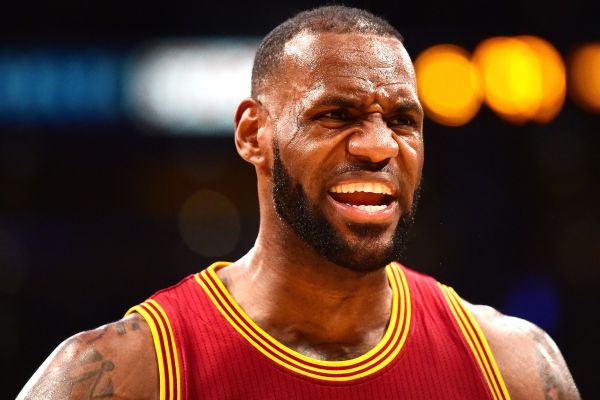 The Most Valuable Player award will come down to Russell Westbrook, James Harden and Kawhi Leonard.

LeBron James will not be in the mix.

James was left out of the running Friday night, when the NBA announced its three finalists for each of its six major awards.

The Cavaliers star set career-highs in assists (8.7) and rebounds per game (8.6) this season. Despite becoming the third player to average 25 points, 8 rebounds and 8 assists per game while shooting 50 percent from the floor in a single season, James will not be able to win a fifth MVP.

Oklahoma City's Westbrook and Houston's Harden have been considered the top two contenders for the MVP throughout the season. With former teammateKevin Durant moving on to Golden State, Westbrook joined Oscar Robertson as the only players in league history to average a triple-double in a season. Westbrook finished with 42 total, breaking Robertson's single-season record of 41 set in 1961-62.

Westbrook led the NBA in total points and was second in total assists, averaging 31.6 points, 10.7 rebounds and 10.4 assists. The Thunder went 33-9 when he recorded a triple-double.

Harden, meanwhile, became the first player ever to score 2,000 points and assist on 2,000 points in a season, creating the most points per game (scored or assisted) in the NBA this season with 56.2.

Playing point guard, he finished first in total assists and second in total points, averaging 29.1 points, 11.2 assists, 8.1 rebounds and 1.5 steals on the season.

Leonard, who has won the last two Defensive Player of the Year awards, led the Spurs to 60 wins for the second straight season for the first time in franchise history. He averaged 25.5 points, 5.8 rebounds and 1.8 steals as the Spurs' leader on offense and defense.

The Sixth Man of the Year award will come down to Golden State forward Andre Iguodala and Houston guards Eric Gordon and Lou Williams. Iguodala posted his highest player efficiency rating (14.4) in four seasons in Golden Stat, while averaging 7.6 points. Gordon made the fourth-most 3-pointers (246) this season, while Williams averaged an NBA-best 17.6 points per game off the bench.

Philadelphia's Joel Embiid and Dario Saric and Milwaukee's Malcolm Brogdon are finalists for Rookie of the Year.

Embiid might have sealed up this award had he been able to stay healthy. He was limited to 31 games due to injury, averaging 20.2 points and 7.8 rebounds. Saric came on in Embiid's absence, averaging 12.8 points, 6.3 rebounds and 2.2 assists. Brogdon was a pleasant surprise for the Bucks. Drafted 36th overall in the second round, he averaged 10.2 points and 4.2 assists and led rookies in steals and assists.

Houston's Mike D'Antoni, San Antonio's Gregg Popovich and Miami's Erik Spoelstra are the finalists for Coach of the Year. D'Antoni's Rockets went 55-27 and made a record 1,181 3-pointers. They also averaged 115.3 points this season.

Popovich led the Spurs to 60 wins for the second straight season and a 20th-consecutive playoff appearance, tying Phil Jackson for most consecutive postseason appearances by a coach in NBA history.

Spoelstra orchestrated a NBA-record turnaround; the Heat went from an 11-30 start to a furious 30-11 finish to reach 41-41. According to Elias Sports Bureau, the 19-games-under-.500 start was the biggest gap that a team has rebounded from to reach .500, shattering the previous record of 12 games under.

Defensive Player of the Year finalists include Golden State's Draymond Green, San Antonio's Leonard and Utah's Gobert. Green led the NBA with a career-high 2.03 steals and was second in defensive real plus-minus (5.03) this season. He was second in defensive win shares (5.4) and second with 3.9 deflections per game. According to NBA.com player tracking data, Green limited opponents to 44 percent shooting at the rim, behind only Rudy Gobert and San Antonio'sLaMarcus Aldridge.

Leonard hopes to join Dwight Howard as the only player to win Defensive Player of the Year honors three years in a row. Leonard was sixth in defensive win shares (4.7) and averaged 1.8 steals and 3.4 deflections per game. According to ESPN Stats & Info, Leonard allowed only 40 isolation points total this season and faced only 43 isolation plays.