Jeff Fisher on Jared Goff's debut: 'You could see the light' 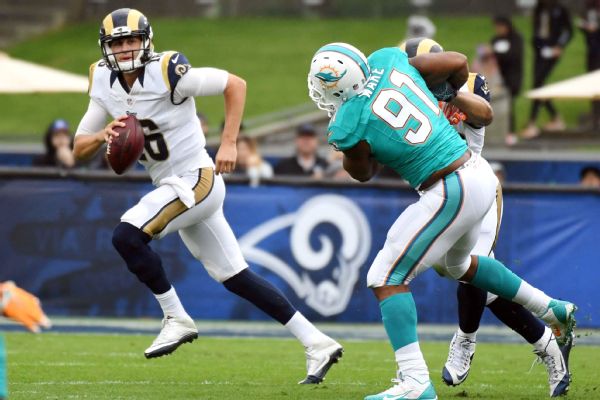 LOS ANGELES --Jared Goffwas a healthy scratch for the regular-season opener, but through hard work, he emerged as the No. 2 quarterback for the Rams behind Case Keenum.

On Sunday against the Miami Dolphins, the No. 1 overall pick from this year's draft made his NFL debut.

While it wasn't what Rams fans would have liked, with Los Angeles losing a 10-point lead in the final five minutes and falling 14-10 to Miami, coach Jeff Fisher said the rookie ably handled the mechanics of the game.

"He did a really good job," Fisher said. "No delay of games. He was in complete control in the huddle. He did a nice job on the line of scrimmage. I was disappointed in the outcome of the game, but you could see the light -- there's light there for him.

Goff finished 17-of-31 for 134 yards with zero touchdown passes and zero interceptions. He was sacked once and finished with a 65.8 passer rating.

Because of the unusually wet weather at Los Angeles Memorial Stadium, Goff said the Rams played things close to the vest offensively. Goff attempted just five passes of 10 or more yards, failing to complete any of them.

Goff said getting in and out of the huddle and not having any delay of games was a positive, but something he would like to improve on is to be cleaner on his reads when the Rams hit the road to face the New Orleans Saints next week.

"I don't expect us to do anything crazy next week," Goff said. "We'll do what we do. Of course we had shots in the plan and stuff that we wanted to do. I was really happy with the playcalling and felt very comfortable out there."

Tight end Lance Kendricks said one thing that surprised him was Goff's ability to create plays outside the pocket. A handful of times Goff escaped the pass rush and either found receivers downfield or ran for extra yards.

"I honestly didn't realize that he's able to get around like he does," Kendricks said. "I was surprised that he got out of the pocket a couple times. So that's something we can work on, him being able to scramble and us making plays when he scrambles."

Goff said he was nervous early on but got comfortable after the first series. He also looked to Keenum for assistance during the game.

"Case was great," Goff said. "I told him before the game that I'm going to need to lean on you. And he gave me good information when I came over there, which helped me out. He told me what the pressures were that they were bringing. He was really helpful."

Fisher said the Rams didn't eliminate anything from the playbook with Goff making his first start but that Los Angeles was limited more by Miami's aggressive defense.

"I was really proud of him," Fisher said. "It's hard to praise any one of your players in a loss like this, but when all eyes were on our quarterback, I thought he handled this game pretty well.

"I'm looking forward to him having another real week of preparation. What greater challenge can you imagine being in his shoes than going down and competing against Drew Brees?That's a huge challenge for a young quarterback."

Goff values game experience
Rams rookie quarterback Jared Goff breaks down what went wrong in the fourth quarter against the Dolphins and how getting into the game will pay dividends in the future. 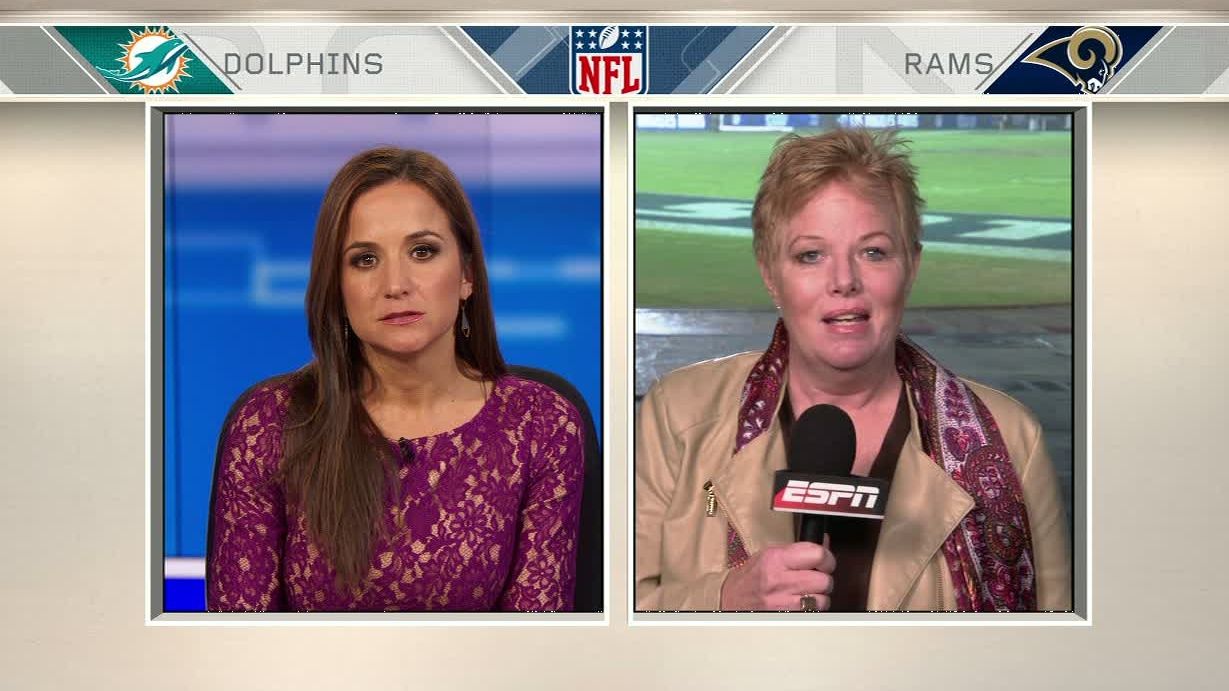 It only gets harder from here for Goff
Shelley Smith reviews Jared Goff's first start in the NFL for the Rams and talks about how dejected the team was following the close loss to the Dolphins.
Related topics:
sportsespnnfllos angeles ramsjared goff
Copyright © 2021 ESPN Internet Ventures. All rights reserved.
More Videos
From CNN Newsource affiliates
TOP STORIES