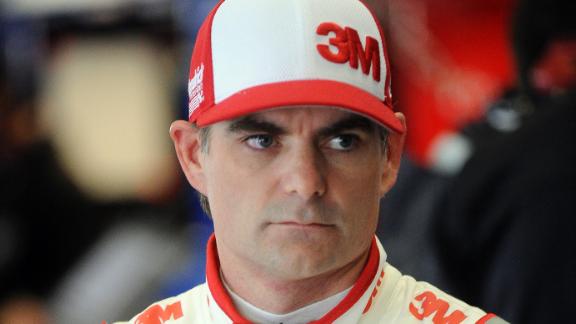 HAMPTON, Ga. -- Former Sprint Cup champions Jimmie Johnson, Jeff Gordon, Tony Stewart and Matt Kenseth were among the 13 drivers who did not get a chance to post qualifying times Friday after their cars didn't get through inspection in time at Atlanta Motor Speedway.

As several teams had problems in the tech area, reportedly in the rear camber area, and had to go through inspection a second time, NASCAR delayed the start of qualifying for 15 minutes. But that wasn't enough as the 15-minute first round was completed before 13 cars could get through and then make a qualifying lap.

Daytona 500 champion Joey Logano wound up winning the pole at 194.683 mph, with Kevin Harvick second (193.792). Jamie McMurray was third, with Denny Hamlin and Carl Edwards rounding out the top five.

With 36 spots available on speed and only 34 taking times, everyone who posted a first-round time got into the QuikTrip 500 on Sunday. The remaining nine spots were based on 2014 owner points. Michael Annett, Mike Wallace, Matt DiBenedetto and Reed Sorenson never took a lap and missed the race pending post-qualifying technical inspection.

Annett, who is running the full season, later struck a deal Friday night to replace Brian Scott in the Circle Sport Racing No 33 car, which will have multiple drivers this season.

"We were excited about qualifying today,"said Gordon, who will start 35th. "I felt like we had a shot at being up front. This is just absolutely ridiculous."

NASCAR Sprint Cup Series Director Richard Buck said the laser inspection bay was open during the test Thursday and many teams were pushing the tolerances looking for mechanical group as part of the new aerodynamic rules.

He said every team had gone through tech at least once 17 minutes before qualifying started, and with a television window, there was no consideration of an additional delay beyond 15 minutes. He said 20 teams had to go through at least two times -- about twice the average on a normal race weekend last year.

"There is no way this many good cars, talented people, that they can't figure out how to get these cars through inspection. Yeah, we're pushing limits, but there's something wrong here. I'm embarrassed for our series right now that this just happened."

For the second race in a row, at least part of the story on qualifying day wasn't about who won the pole but instead the controversy surrounding the session. Drivers like the group qualifying format except for at superspeedways Daytona and Talladega, and they were looking forward to competing this week much more than two weeks ago.

Stewart tweeted he was "pissed off" having to start 39th, and felt the entire day was a waste of working on qualifying.

"It's not uncommon to miss by a few thousandths of an inch," said Johnson, who will start 37th. "I think a lot of cars had the same problem -- they missed it by the tiniest amount. ... It is what it is. We're at a track that is very forgiving from a starting position standpoint."

Kenseth said when he walked to pit road 10 minutes before the time qualifying was initially supposed to start, he saw only 14 cars.

"They should really figure out how to get everybody through tech before qualifying starts, first of all," Kenseth said. "If they can't do that, they probably should have just postponed qualifying before they could get everybody through tech when there's that many cars. It obviously was not a team, two teams or five teams or 10 teams trying to get away with something."

Kenseth said he felt bad for the fans and the drivers who didn't qualify.

"You have all those people up there [in the stands] to watch qualifying and don't really get to watch everybody qualify," Kenseth said. "It's kind of confusing and disappointing for sure.

"I feel bad for whoever didn't get through there and didn't make the race."

Wallace was one of those, and he left frustrated. It wasn't just about missing the race; it was about losing the opportunity for the Jay Robinson Racing team to earn owner points, therefore putting it in jeopardy of missing future races when the final seven spots in the field are based on 2015 owner points starting with the fourth race of the season.

"It's very discouraging not to even have a chance," Wallace said. "That's the biggest thing whether we made it or not. ... I'd say it's somewhat devastating to the point of very crucial for our team."

Wallace and Johnson said they believed that officials were more lax letting cars through once the qualifying session was about to start.

"I wish there was a deal where you look at the sheet of paper and they're like, 'You're off by a thousandth of an inch, we're going to let you go here,'" Johnson said. "I think they kind of did that towards the end. I think our car was one of the last cars to actually get the physical sheet [of paper] and the people behind us they just started letting them roll. I don't think that's quite fair, either."

Buck said they were "hustling and pushing" but there was no difference in the inspection scrutiny from the first car to the last car.