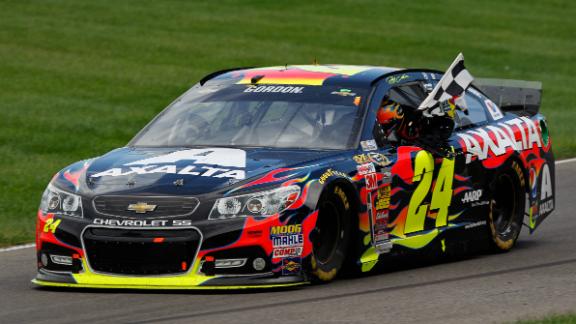 ESPN
INDIANAPOLIS -- With a tinge of gray hair at his temples, his hat on backward and his two young children by his side, Jeff Gordon celebrated as if he was 23 years old again.

Gordon won a NASCAR-record fifth Brickyard 400 on Sunday, eight days before his 43rd birthday and on the weekend Indianapolis Motor Speedway celebrated the 20th anniversary of his first Brickyard victory.

Gordon's first win came before the celebratory kissing of the Yard of Bricks was en vogue, before he became a household name, while Sprint Cup Series rookies Kyle Larson and Austin Dillon were still in diapers. Now a family man with an aching back, Gordon used Sunday to show he's still at the top of his game.

"If you can do it here, you can do it anywhere," said Gordon, who has led the Sprint Cup Series standings for 13 of the last 14 weeks. "It's certainly going to be a huge confidence boost for this team. We recognize the significance of this.

"We saw we were points leaders, we won at Kansas, but I don't know if we believed we were capable of winning this championship this year. We do now."

To prove it to himself, to his Hendrick Motorsports team and to his ardent fan base, Gordon needed a vintage close to Sunday's race.

Hendrick teammate Kasey Kahne led a race-high 70 laps and seemed only to be racing against his gas tank when a late caution put the race back into Gordon's hands. He'd have one shot at passing Kahne, on a dreaded restart, and nobody was sure if ol' "Four-Time" had it in him.

Restarts are his Achilles heel, and he's struggled with them for several years. And Kahne, who is winless on the season, desperately needed the victory to grab a berth in the Chase for the Sprint Cup championship field.

"The restart is going to be the race, really," Gordon's crew chief, Alan Gustafson, conceded in a television interview moments before the field went green with 17 laps remaining.

Kahne picked the lower, inside lane for the restart, and Gordon found himself on the outside and exactly where he wanted to be. Gordon tried to set a quick pace as they headed to the flag, and Kahne tried to slow it down in the restart zone.

Gordon shifted into fourth gear and surged past Kahne on the outside, and Gordon kicked it into cruise control as he sailed away for the win.

"I think we both knew that was for the win," Gordon said of Kahne. "Out of nowhere, I have the restart of my life at the most important moment that you could ask for in a race, in a season, at a race like this. That was just awesome."

The win came on the 20th anniversary celebration of Gordon's win in the inaugural Brickyard 400, and on "Jeff Gordon Day" as declared by the Mayor of Indianapolis. The win moved Gordon into a tie with Michael Schumacher, whose five Formula One victories at Indy had been the gold standard.

"I told him this morning that this was his day," said team owner Rick Hendrick.

Kahne plummeted to fifth after the restart, then ran out of gas on the final lap and had to nurse his car home to a sixth-place finish. He said he erred in picking the inside line for the restart.

"I should have chosen the top (lane), obviously," he said. "I pretty much let Jeff control that last restart. I thought I made the right decision."

Hendrick said he had no favorite in that situation, and hoped only that Gordon and Kahne did not wreck each other.

"I know Kasey, he needed a win, and he ran awful good today," Hendrick said. "But Jeff had the dominant car, so it all worked out."

Kyle Busch finished second, 2.325 seconds behind Gordon, and was followed by Joe Gibbs Racing teammates Denny Hamlin and Matt Kenseth. After the race, NASCAR said Hamlin's car had failed post-race inspection and the parts in question would be taken to North Carolina for another look.

Joey Logano was fifth in the highest-finishing car from Team Penske, which brought Juan Pablo Montoya to the race in an effort to get the win. Roger Penske has won a record 15 Indianapolis 500s, but is winless in the Brickyard. Montoya was never a factor and finished 23rd.

Larson, who grew up a Gordon fan, finished seventh and likened Gordon's win on Sunday to Dale Earnhardt Jr.'s season-opening win in the Daytona 500.

"To see Jeff Gordon win is pretty special -- it's kind of like Junior winning the 500 this year," Larson said.

Kevin Harvick, the polesitter and the driver with the car most everyone thought would be tough to beat, was eighth and followed by Earnhardt and rookie Austin Dillon.

Carl Edwards finished 15th hours after Roush-Fenway Racing finally confirmed he was leaving the team at the end of the season.

He has 90 Cup wins, third on the career list.

He said it took extreme focus over the final 10 laps not to prematurely celebrate and cough away the win. It meant tuning out the crowd, which was on its feet and cheering him to the finish.

"I was trying not to let it get to me and not think about it too much," he said. "And yet you can't help it. It's such a big place and such an important victory and a crucial moment in the season and the championship, and those emotions take over.

"This one is for all those fans throughout the years and all weekend long -- they're saying, 'We believe you can get (championship) number five.' We got (Brickyard) No. 5!"