Jim Harbaugh responds to other coaches' criticism of satellite camps 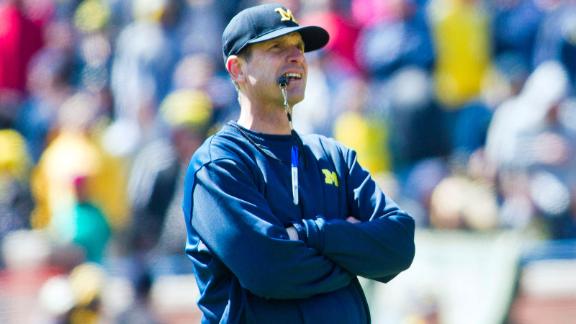 ESPN
By Josh Moyer
Michigan coach Jim Harbaugh has drawn his fair share of criticism for holding 11 satellite camps in seven states -- from Pennsylvania to California -- but he fired back recently to USA Today Sports.

"In my America, you're allowed to cross state borders," Harbaugh said. "That's the America I know."

"I think he's right on," John Harbaugh said. "It's America. Isn't that what he said today? In our America, aren't we allowed to cross state lines?

"But think about it. What are we arguing against? An opportunity for young athletes to take a look at colleges from other parts of the country, especially those that aren't in a socio-economic situation where they can travel all over the country with their parents and look at schools.

Not every conference would agree. ACC commissioner John Swofford previously told ESPN.com that such camps weren't a healthy part of the recruiting process, while coaches like Alabama's Nick Saban have also voiced their opposition.

On Tuesday, Mississippi State's Dan Mullen became the latest satellite camp detractor by labeling Harbaugh's camps a "recruiting fair." He spoke about the issue at length on HeadtoHead Radio.

"I imagine Jim Harbaugh, if he's going to have a camp, would want to coach the kids in Michigan, the young kids in Michigan, maybe how to be better football players," he said. "So why do they need one all over the place? The only purpose obviously is for recruiting, which I don't think is the right purpose for camps."

Of course, Harbaugh had an answer for that, too. He told USA Today the satellite camps weren't about recruiting or rebuilding the brand.

"I don't know what that means, a brand," Harbaugh said, adding his motivation was about "sharing a love for football."

Information from ESPN Ravens contributor Todd Karpovich was used in this report.