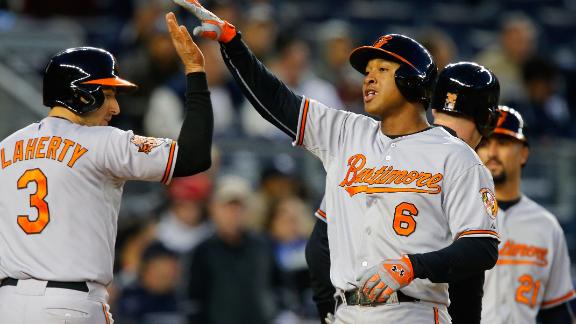 One day after lashing out about two fans who ran onto the field at Yankee Stadium, Jones said he wasn't buying into the hype surrounding $155 million Japanese right-hander Masahiro Tanaka.

"Why don't you ask Tanaka about me? I'm the one who's been over here in the major leagues for a while," the Orioles center fielder said Tuesday, according to Newsday. "Congratulations, he did it over there. Don't make it like he's the dirtiest guy in the world. He was 24-0 -- in Japan."

Jones, who struck out twice against Tanaka on Wednesday, still wasn't impressed after Baltimore's 5-4 victory.

"Am I [supposed] to go home and say I faced Tanaka tonight? Just go throw a party that I faced Tanaka? It's another pitcher," Jones told Newsday. "Another pitcher in the rotation. Nothing special to me. It's just another guy that we have to go through to get to where we want to be."

Tanaka, making his second big league start, was not involved in the decision. He allowed seven hits, including a long three-run homer by Jonathan Schoop, and struck out 10 in seven innings.

After Monday's game, Jones didn't mince words about the two fans who ran onto the field during the Orioles' 14-5 win. In fact, he voiced his displeasure to the offenders as they were taken away.

"I let them know how I felt, obviously a lot of choice words because I think it's idiotic for people to run on the field and I think the punishment needs to be a lot harsher," Jones said. "And they should let us have a shot to kick them with our metal spikes on because it's stupid.

"You look like a [fool] when you run on the field. We don't go to any other events. We don't go to other sporting events and do that to their jobs, but they come to ours and do that. I get it, you're drunk and you want to be on 'SportsCenter.' Your [butt] is going to jail with a fine, and you might not be allowed to come back to the ballpark."