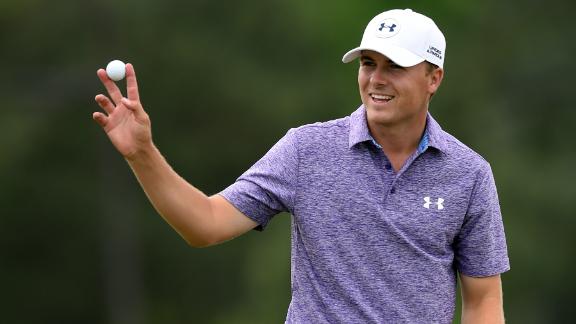 AUGUSTA, Ga. -- So much for all that Augusta National lore as it relates to needing experience around the storied course. At least in the case of Jordan Spieth, youth is not an obstacle in the least.


A year after finishing second in his first appearance at the Masters -- and playing in the final group alongside eventual champion Bubba Watson -- Spieth is threatening to run away with the year's first major championship.


After an opening-round 64, Spieth followed with a 66 to finish 36 holes at 14-under 130. He leads Charley Hoffman, who shot 68, by five strokes, matching the largest halfway lead in Masters history.


"It's cool," Spieth said. "Any time you can set a record here is pretty awesome. I'm very excited about today and the way I struck the ball. I struck it I thought better than yesterday. Didn't rely on the [good] breaks as much. Very pleased."


Woods was 3 under on Friday. He is 2 under for the tournament, comfortably above the cut line but staring at a 12-shot deficit in his quest for a 15th major.


Tom Watson had hoped to set a Masters record by making the cut at age 65. But after opening with a promising 1-under 71, Watson ballooned to an 81 on Friday, one of the worst rounds of his long Augusta career. He finished up with a triple-bogey 7 at the final hole.


Also missing the cut was 55-year-old Fred Couples, who shares a Masters record of playing on the weekend in 23 consecutive appearances. He is heading home with a 9-over 153 total.


Rory McIlroy was in danger of being cut before a strong back nine gave him a 1 under for the day and 2 under for the tournament. Playing alongside McIlroy in the second-to-last group, Phil Mickelson finished at 6 under and is in sixth place, eight shots back of Spieth.


"You never know what's going to happen in this golf tournament, and if something were to happen, I want to be there," Mickelson said. "Be there to take over."


But after Hoffman, the next nearest challengers to Spieth areseven back. That's a lot of strokes, even if there are 36 holes to go.


"It's a long, long way from being finished," said Ernie Els, nine shots back in seventh place. "A lot of work to be done still, so we'll see. But he's very, very impressive."


Spieth, 21, would be a senior at the University of Texas had he not elected to turn pro in the fall of 2012.

Since then, Spieth managed to earn PGA Tour status in 2013 despite failing to make it through the qualifying tournament, won his first tournament at the 2013 John Deere Classic, was picked for the U.S. Presidents Cup team and has three worldwide victories in his past 11 events dating to the end of 2014.


That includes nine top-10s, with a victory at the Valspar Championship, a runner-up finish at the Valero Texas Open and a playoff loss last week at the Shell Houston Open in his three starts coming into the Masters.


On another day ripe for scoring at Augusta National,Dustin Johnsonbecame the first player in Masters history to make three eagles in one round. A bogey from the trees on the last hole gave him a 67, and he was seven shots behind, along with Justin Rose (70) and Paul Casey (68).


Hoffman made his way around bogey-free until failing to get a chip up-and-down on the 18th hole.


It gave him a spot in the final group Saturday in a tournament he has mostly enjoyed only on TV.


"I wish it wasn't only my second Masters, but obviously I'm a little more mature than I was the first time around or even the young golfers that are playing now," the 38-year-old said. "They change it up every once in a while, but you sort of know how to play because you've watched it, and I think that's what's so great about this golf tournament. Everybody sort of knows how the ball rolls when it gets to a certain spot and where you need to be."


Hoffman's 9-under 135 through 36 holes would good enough to be in the lead in eight of the past nine Masters. The course is playing softer this year, though, and Spieth has taken full advantage of it to build a commanding lead.


"Jordan's playing great golf, so sometimes you get in the lead and you sort of maybe change your game plan a little bit," Hoffman said. "I just kept my game plan and just kept trying to make birdies, was able to do a pretty good job of that."

Spieth has 15 birdies through two rounds -- one more than he had through 72 holes a year ago. And he's made just a single bogey.


"He is very impressive," said Henrik Stenson, who played with Spieth during the first two rounds. "The strongest part of his game over the time that I've known him over these last couple of years is definitely his putting and pitching and wedge game. When he's playing obviously as he is, he hits a lot of fairways and greens and sticks the other ones in there close, as well.


"But his putting is the one thing that stands out. He's made so many great putts."


Yet he missed makeable birdie putts at the ninth and 18th holes that would have made the round even better.


Spieth birdied all four par-5s and whenever he was seemingly in trouble managed to make the best of the situation. For the day he hit 13 of 18 greens but needed just 25 putts.


Not bad for a guy who has just six competitive rounds at Augusta, the place where no Masters rookie has won since Fuzzy Zoeller in 1979. Charl Schwartzel is the only golfer to win the Masters in his second start at Augusta National (2011).


"Seems like there's been quite a few guys who have had success at a young age," Spieth said. "I think Seve [Ballesteros] won it when he was 23 and Tiger at 21. Obviously I'm not comparing myself to those guys in any way ... but it means it can be done.


"I got the awe factor out six months before I even played the first time. To get here and play rounds ahead of time, to play the golf course I grew up watching and admired. And after getting into contention last year and seeing what Sunday in the final group was like, now it feels more like a regular event."