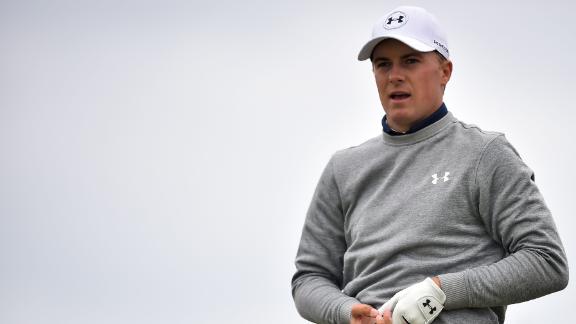 TROON, Scotland -- A promising start on Saturday morning didn't last over Royal Troon's treacherous back nine for Jordan Spieth, who is having difficulty matching his form of a year ago -- and finds the comparisons unfair.

Spieth's 1-over-par 72 during the third round of The Open means he has failed to break par in any round of a major championship in 2016 since an opening 66 at the Masters, where he squandered a five-shot advantage over the final nine holes.

Now he's just looking to gain momentum for the PGA Championship in two weeks, as he was 15 strokes behind Phil Mickelson prior to the leader teeing off.

"It's been tough given I think it's been a solid year and I think, had last year not happened, I'd be having a lot of positive questions," Spieth said. "Instead, most of the questions I get are comparing to last year and therefore negative because it's not to the same standard.

"So that's almost tough to then convince myself that you're having a good year when the questions I get make me feel like it's not. So that's a bit unfair to me, but don't feel sorry for me. I'll still be OK. But I would appreciate if people would look at the positives over comparing to maybe hopefully what would happen to me a few times in my career a year, like last year. It seems a bit unfair at 22 to be expecting something like that all the time."

Spieth won the Masters and U.S. Open last year and came within a stroke of a playoff for the third leg of the Grand Slam at The Open at St. Andrews. He then finished second at the PGA Championship and was third at this year's Masters.

But despite victories at Kapalua and the Colonial, Spieth's year has been marked by inconsistency and judged by the five-victory season -- that was capped with a FedEx Cup title -- in 2015.

On Saturday, after making the cut on the number, Spieth played the first seven holes in 4-under par. Then he missed short par putts at the ninth and 10th, double-bogeyed the 11 and added another bogey at the 15th, failing to make any more birdies.