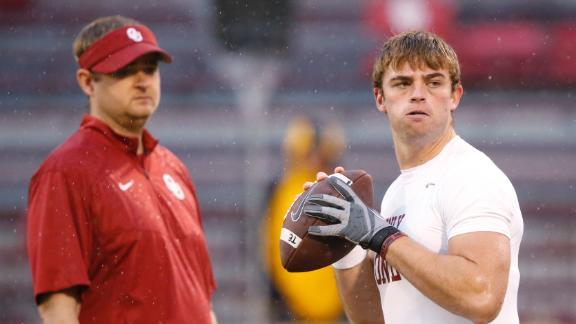 Heupel, who spent the past four years as Oklahoma's offensive coordinator and previously was an All-American quarterback for the Sooners, posted a statement earlier Tuesday on his Twitter account.

"It has been an honor to be a part of The University of Oklahoma for 14 years," Heupel said in the statement. "Oklahomans and Sooner fans have embraced me as a coach and as a player, including that magical National Championship season."

"It's incredibly difficult," the coach told reporters, according to the Tulsa World. "It's not something any coach wants to do.

"They were incredibly professional ... (they were as) classy as you'd expect them to be. They will have excellent careers."

Oklahoma won the Sugar Bowl at the end of last season and entered this season with national championship hopes and a No. 4 ranking.

The Sooners won five of their first six but finished 8-5, ending the regular season with a stunning overtime loss to Oklahoma Stateandthen losing 40-6 to Clemsonin the Russell Athletic Bowl.

Heupel was the Heisman Trophy runner-up to Chris Weinke in 2000, when he led the undefeated Sooners to a victory over Florida Statein the national championship game.Heupel became the school's quarterbacks coach in 2005 and moved up to co-offensive coordinator in December 2010.

Norvell joined the staff in 2008 as assistant offensive coordinator and receivers coach.

Stoops told reporters he has a clear vision for the offense.

"I've got a strong idea of where I want to go with it," he said.

ESPN's Joe Schad and The Associated Press contributed to this report.