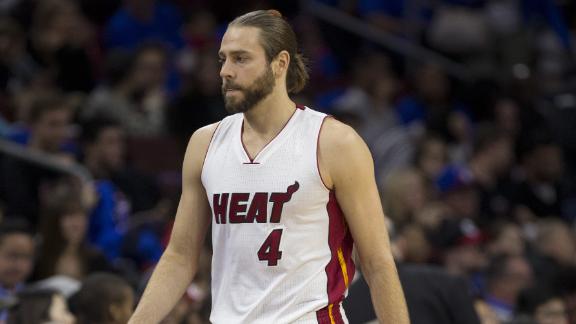 Heat coach Erik Spoelstra announced the status of both players after Monday's practice, a session in which the team had just eight players available in advance of Tuesday's game in Brooklyn. The Heat also could be without star guard Dwyane Wade, who missed Monday's practice with a stomach virus.

"Injuries are a part of this game -- how you respond to adversities, to things that are tough, that's what reveals your collective character as a group," Spoelstra said. "I told the guys there will be brighter days. It always usually evens out at the end. We're being hit pretty strong with the injury bug right now."

The Heat (11-13) are off to their worst start in Spoelstra's seven seasons as coach and now face the challenge of moving forward for the next several weeks with a severely depleted roster. McRoberts, one of the team's top free-agent additions this past summer after the departure of LeBron James, is scheduled for surgery to repair a torn meniscus within the next few days.

McRoberts injured the knee late in the fourth quarter of the Heat's win in Phoenix last Tuesday when he fell awkwardly to the court while pursuing a loose ball. He played in 17 games this season and averaged 4.2 points, 2.6 rebounds and 1.9 assists, but had been recovering from one injury or another since he signed a four-year, $23 million deal with the Heat in July. He had toe surgery in the offseason and was also limited through the initial months of the season with foot and back injuries.

"You have to fight yourself from [feeling sorry]," Spoelstra said after McRoberts' tear was confirmed following an MRI on Monday. "It was a kick to the gut when we heard about Josh. You feel for him more than anything, because he wanted to come in here and contribute. And you started to see flashes of it."

The Heat aren't certain when Bosh will be healthy enough to return. Miami's leading scorer and rebounder, Bosh felt his left calf tighten after the Heat's victory in Utah on Saturday, and he was held out of Sunday's blowout loss at home against Chicago. Until then, Bosh had been the only starter to play in every game of the season for the Heat, who have used 10 different lineups through 24 games.

Bosh was on the practice court Monday but was limited to free throw shooting. He did not travel with the team to Brooklyn on Monday afternoon, with Spoelstra saying Bosh would focus on rest and treatment for the immediate future. Bosh did not speak to the media after Monday's practice, but he said Sunday night that he would err on the side of caution as he recovers from the strain.

"It's a wear-and-tear thing that kind of sprung up on me," said Bosh, who is averaging 21.6 points and 8.2 rebounds. "It just seems to be a dark cloud over everything right now. Everything seems to be tough. You have to find a way to deal with the tough times right now, find out a way to keep everybody mentally stimulated around here. I'm going to make sure I do what's necessary to get back."

The lack of continuity has had a crippling effect on the Heat, whose preferred starting lineup of Bosh, McRoberts, Wade, Norris Cole and Luol Deng has played only a total of 34 minutes this season. Despite those initial struggles, Miami was hoping to use an upcoming, seven-game homestand -- highlighted by the Christmas Day visit from James and the Cavaliers -- to gain some traction.

That process grows even more daunting in light of the recent rash of injuries and ailments.

Spoelstra said he would meet with team president Pat Riley and general manager Andy Elisburg to figure out what personnel options the Heat might consider to supplement the roster. Riley, Elisburg and team CEO Nick Arison watched Monday's practice as Spoelstra tried to work with just eight players.

Earlier Monday, the Heat recalled first-round draft pick Shabazz Napier and journeyman center Hassan Whiteside from their D-League affiliate. Spoelstra said Napier and Whiteside would meet the team in Brooklyn for Tuesday's game. The injury situation could also force the Heat to get more active in potential trade talks, with free agents who signed this past summer becoming trade-eligible on Monday.

The Heat may be eligible to apply for an injured player's exception from the league if McRoberts is indeed ruled out for the season. The team will have a better assessment of his status after surgery.

"We'll talk quite a bit," Spoelstra said of discussions with the front-office staff. "We have the best in the business [sitting] over there. So we'll meet. My focus right now is on who we're bringing to Brooklyn."