Josh Norman, Patrick Peterson to be on same field after summer spat 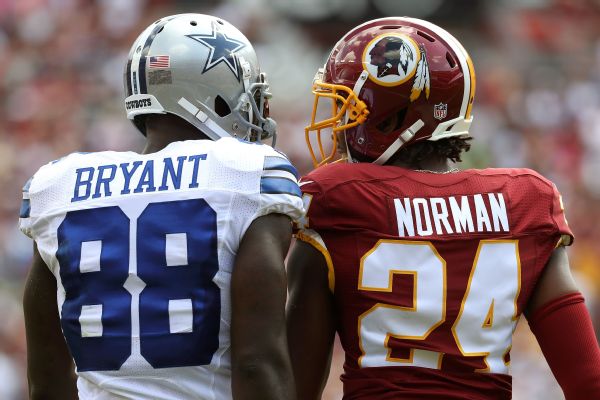 ASHBURN, Va. -- Josh Norman's beef with Cardinals corner Patrick Peterson began in the summer on social media. On Sunday, their teams will meet on the field when theRedskinsplay at Arizona.

Peterson and Norman clashed indirectly after the Cardinals corner mocked his Redskins counterpartover a video from training camp that showed wideout Pierre Garcon running past Norman, the NFL's highest-paid corner.

It was one of many mini battles for Norman this season, including one from Thanksgiving Day against Dallas receiver Dez Bryant. Norman has been the subject of much discussion among fellow players.

In late July, Peterson retweeted video of Garcon winning on a route against Norman and said, "but he's the highest rating lol madden is a joke." Norman was the No. 1-rated corner in "Madden NFL 17"; Peterson was fourth.

That prompted Norman to return volley at Peterson a few days later: "That guy? Come on, man. Be No. 4 and be happy. Come on, don't talk about me, I'm not talking about you."

"I can't get into it, man," Norman said Monday. "Everybody wants to go against me for some reason. That was then; this is now."

On Thursday, Norman and Bryant feuded during the game and afterward, both on the field and in the media. All Norman had to say Monday was, "It was a game; we lost, they won. That's it."

But Norman has had tiffs with the New York Giants' Odell Beckham Jr., as well, although their first encounter this season didn't result in fireworks. Norman has been picked apart for failing to cover the opposition's best receiver in the season opener against theSteelers, for not facing Bryant when he played in the slot, and for playing mostly zone rather than man coverage.

It's been like that since he signed a $15 million-per-year deal with Washington in April.

"I really don't care, man," Norman said. "I don't. I'm where I'm at because of what I've done, and nobody can take it away from me no matter how hard they try. So it really doesn't matter to me. You have to go out and do your job and be that attack guy and see what comes up. You can't control nobody and what they do."
Related topics:
sportsespnwashington redskinsarizona cardinalsdez bryantnflpatrick petersonjosh norman
Copyright © 2022 ESPN Internet Ventures. All rights reserved.
TOP STORIES
EXCLUSIVE: Mom reacts to murder charge in daughter's overdose
2 cases of omicron sub-variant BA.2 detected in Santa Clara Co.
7-year-old SF girl and mom pray for miracle to avoid eviction
Bay Area Frenchie reunited with owner after gunpoint robbery
SJ becomes 1st in US to require gun liability insurance
Man denied heart transplant because he has not received COVID vaccine
Wealthy Bay Area city pushes back against new housing proposal
Show More
Apple CEO allegedly stalked by woman who showed up at house
Surging food prices starting to lose steam
San Mateo Co. officials vow PPE debacle will never happen again
How to get free N95 masks from pharmacies, community health centers
Bay to LA rivalry: Bragging rights at stake in NFC title game
More TOP STORIES News