Just how bad is having the worst farm system in baseball, really? 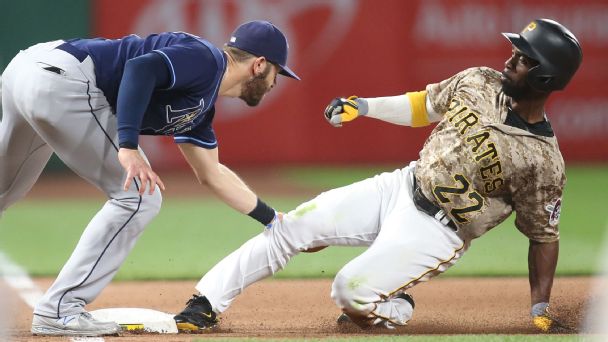 ESPN
By Sam Miller
Just because it's baseball's offseason doesn't mean we don't look at standings. In the absence of actual games creating literal standings, we look at proxy standings, subjective standings, projected standings -- we look at any indicator of our club's relative strength or relative weakness far off in the future.

So, the San Francisco Giants traded for Andrew McCutchen, and beyond the question of whether McCutchen is fun to watch and cheer for (he is) sits the question of what it means for his new team's projections, for its payroll and long-term salary obligations, for its bid to stay under the luxury tax and, perhaps most important to the modern fan, what it means for the farm system.

Baseball roster-building largely follows the law of conservation of energy: Wins aren't often created out of nothing but are transformed from one form to another -- most commonly from the future to the present, or vice versa. By acquiring Evan Longoria and McCutchen, and by getting some salary relief from both the Rays and the Pirates, the Giants had to trade away young talent. That includes Christian Arroyo (to the Rays) and Bryan Reynolds (to Pittsburgh), two of the top players in an already thin system. The Giants' current crop of farmhands might not be the weakest in baseball, but it is clearly weaker now than it was three months ago, and it's weaker by far than it would have been had the Giants decided, in the middle of a 98-loss 2017 season, to aggressively empty their major league roster and get young. This is why a Giants fan can simultaneously acknowledge the fun of McCutchen, hope for a playoff bid in 2018 and also worryingly invoke the 2013 Phillies.

But what exactly does a weak system mean for the standings? To answer that, we built a massive spreadsheet, with organizational talent rankings from 1999 through 2010 -- using Baseball America through 2008, Keith Law for 2009 and 2010 -- and each team's actual major league performance for the eight seasons that followed each ranking. These rankings consider only the players who still qualify as prospects, who haven't exhausted their rookie eligibility. And here's what we found:

Wait! At the risk of ignoring the obviousness of the question, let's acknowledge that, of course, what we found is that teams with great farm systems do better in the future than teams with terrible farm systems. That's not really a spoiler, because what world would we live in where it was otherwise? But we can get specific about how much better, and in what time frame.

Year 0, the year before the rankings come out

We're going to focus on only two types of teams here: teams that ranked first, second or third in a given year's organizational rankings and teams that ranked 28th, 29th or 30th, as the Giants did in Keith Law's org rankings that came out today (they narrowly dodged rock bottom, finishing 29th overall,between the Marlins and Mariners).

It doesn't really matter how teams did in the seasons before the rankings -- we want to know how they'll do in the future -- but it turns out that in the dozen of years we've analyzed these rankings, the teams with the great farm systems also happened to start out better at the major league level (averaging almost 82 wins the year prior) than the teams with the terrible farm systems (averaging just under 79). You can speculate why this would be, and I'd speculate it's just noise from a small sample, but it's a baseline for what comes next.

Teams with great farm systems win, on average, 84 games in the seasons of the rankings. This is an improvement. One might speculate that the farm is starting to pay dividends, either with rookies who are beginning to contribute or by providing trade chips to acquire veterans. Or else it's still just noise.

The teams with the great farm systems 12 months earlier have now, apparently, begun to really incorporate that talent; or, perhaps recognizing a competitive window opening with the arrival of said talent, they have invested more money in the major league roster. This is important: None of these records happen in a vacuum. Good prospects might add a couple of extra wins. Those couple of extra wins might push a team into a pennant race and encourage the front office to bump payroll and sign veterans who also add a couple of extra wins. Regardless, the teams with the good farm systems are adding a lot of wins! They win, on average, 85 games in Year 2, another improvement.

And they begin to pull away from the teams with bad farm systems, who win only 80 games, falling back two wins from the previous season.

I want to reiterate, there's a lot of noise in these numbers, but they suggest that, when you read Keith Law's farm rankings, the teams at the top have about a five-win head start in the year 2023 over the teams at the bottom. The gap is persistent, and it's not small.

It's also not massive or prohibitive. Five wins can make all the difference in a pennant race, but for most teams last season, it wouldn't have changed anything. Five of the six division winners would have still won their divisions if you shaved five wins off their records. And 16 of the 20 non-playoff teams last year would have still missed the playoffs if they'd gained five wins. (Three of the four exceptions would have merely tied for the second wild-card spot and earned a play-in game to reach the play-in game.) And, naturally, there are many exceptions: The 2002 Angels and the 2006 Cardinals each won the World Series three or four years after a 30th ranking.

Remember, as well, that this is the difference between the very best and the very worst. Dropping just a few spots, as the Giants did this winter, would have a much smaller effect on the team's future outlook. Matt Swartz, writing for FanGraphs, tried to measure the predictive power of organizational-talent rankings back in 2012. He found that "each team can expect about 1.4 more wins in the next five years than the team ranked below it, with the largest gap occurring two years later with about 0.33 wins difference for each spot in the rankings. That's definitely important, but it's hardly a crystal ball."

Indeed, Swartz found, the size of a team's payroll will tell you a lot more about its future than the strength of its farm system. Payroll tends to be more fundamental than farm-system strength, which is constantly changing with circumstance (promotions, draft pick placement, proximity to the playoffs, luck). And the power of payroll dwarfs the power of prospects. Swartz writes: "Payroll ... can tell you about four times as much as [sic] about the difference between teams over the next five years as farm-system rankings can."

By Year 8, the advantage is gone, all the way. Teams that had the good farm systems win 81.1 games. Teams with the bad farm systems win 81.2. So if you're a Giants fan who thinks the team is draining way too many future resources in one last, desperate bid to stave off collapse, you've got a fair reason to worry. But 2025 isn't that far off.
Report a correction or typo
Related topics:
sportsespnprojectionsmlbprospectsbryan reynoldsfarm systemminor leaguersstandingsseattle marinersmiami marlinsminor leagueandrew mccutchenbaseball americadraftsan francisco giantskeith lawchristian arroyoevan longoria
Copyright © 2020 ESPN Internet Ventures. All rights reserved.
More Videos
From CNN Newsource affiliates
TOP STORIES