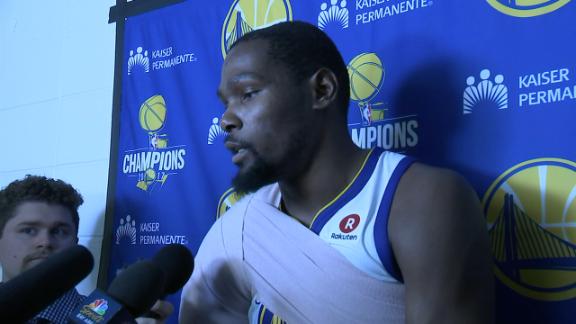 MINNEAPOLIS -- In the wake of his team's second straight defeat, Golden State Warriors superstar Kevin Durant remained optimistic about the defending NBA champions' future but acknowledged that it is strange playing without Stephen Curry and several other key veterans.

"It's weird not having Steph out there," Durant said after a 109-103 loss to the Minnesota Timberwolves on Sunday. "AndAndre [Iguodala]and D-West, Jordan [Bell], so we're missing a lot, and we're just kind of playing on the fly each possession."

"Quinn has been up and down in the G-League, so it's something we got to deal with, something that we just got to figure out, work through," Durant said. "And it's actually been pretty fun trying to figure things out throughout the game. Everybody's just coming together even better. We lost two in a row, but the energy on the bench was great, the coaching staff has been digging down deep trying to find things for us that will work because our offense is predicated on Steph andKlay [Thompson]kind of running around the 3-point line, knocking down 3-point shots and spreading out.

"Without Steph there, Quinn is asked to do a lot, so it's definitely a different dynamic when you have, [as] opposed to Steph Curry, when you're having Quinn Cook. He's doing a good job stepping in and playing extremely hard, and I'm proud of him."

Cook had 4 points, 4 rebounds and 2 assists in Curry's place during Sunday's game. Despite the latest setback, Durant and his teammates remain confident that they will be able to catch a rhythm once everyone returns. The Warriors are now two games behind the Rockets in the loss column for the No. 1 seed in the Western Conference.

"We're a veteran group, and we've got high-IQ players that know how to play," Durant said, "You could plug D-West back in, Steph, Andre, they know how to play, and they're watching the games as well. Steph is the system here, and he's been a part of this since Steve Kerr's been here. And D-West knows how to play and won a championship with us last year. Andre is in the same boat as Steph. Those guys are smart, and we're looking forward to having them back because they definitely change our team and get us back on what we want to do out there as a basketball team. Because we have a system in place that maximizes everybody's strengths, and you could see if you take a few guys out, it's a totally different game. So I'm proud. Everybody's trying to figure it out, but just to keep working, man."

Durant dropped 39 points on the Timberwolves, but he and fellow All-Star Thompson combined to go just 19-for-54 from the field.

"We're just in a tough stretch," Warriors head coach Steve Kerr said. "And I'm really proud of our guys. I thought they battled again tonight, and we just didn't have enough in the tank, but I'm very pleased with the effort. We'll get some guys back here hopefully in the next week or two, and I'm very confident with where we're heading. We're just in a little bit of a tough stretch."

Aside from getting their injured players back, the Warriors are hoping they can get back on track next week, with three straight games against teams with below-.500 records.

"It's tough when you're missing that many key guys," All-Star Draymond Green said. "But I think those guys will get back in time enough for us to find a rhythm that we need."

The message reverberated throughout the locker room. There is a little disappointment with the past two results, but the group remains confident in the belief that better times will come back soon.

"The season's always a tune-up for the playoffs," Durant said. "And if we had won this game, we wasn't going to spray champagne in the locker room and be excited on the way back to the Bay. So in a loss we can't hang our heads. We just got to keep playing, keep working, keep figuring things out, and we'll be fine." Durant: 'Steph is the system here'
Kevin Durant talks about what Steph Curry, David West and Andre Iguodala bring to the Warriors and how he is looking forward to have them back.
Report a correction or typo
Related topics:
sportsespnlossgolden state warriorsstephen currydavid westkevin durantinjurynbajordan bellandre iguodala
Copyright © 2020 ESPN Internet Ventures. All rights reserved.
More Videos
From CNN Newsource affiliates
TOP STORIES