Kevin Durant: Meant no offense in comments about India 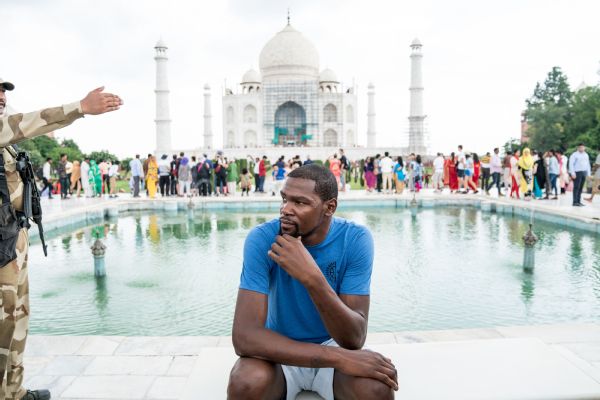 SAN FRANCISCO -- Basketball star Kevin Durant has issued an apology for saying India is "20 years behind" and for several other comments about the Asian country.

The Golden State Warriors forward tweeted Friday that he's "sorry that my comments about India were taken out of context."

Durant said he plans to return to India to run more basketball camps and that he meant no disrespect.

Durant traveled to India recently and spoke about the trip in an interview with The Athleticpublished this week.

In the interview, Durant marveled at the "cows in the street, monkeys running around everywhere, hundreds of people on the side of the road" and visible poverty.

"It's a country that's 20 years behind in terms of knowledge and experience," he said, adding that his visit to the Taj Mahal was eye-opening and not what he had imagined.

He had expected the monument to be "holy ground, super protected, very, very clean," but instead, as he drove up, it reminded him of places where he grew up near Washington, D.C., he said.

"Mud in the middle of the street, houses were not finished but there were people living in them. No doors. No windows ... stray dogs and then, boom, Taj Mahal, one of the seven wonders of the world."
Report a correction or typo
Related topics:
sportsespngolden state warriorskevin durantindianbaapology
Copyright © 2020 ESPN Internet Ventures. All rights reserved.
More Videos
From CNN Newsource affiliates
TOP STORIES