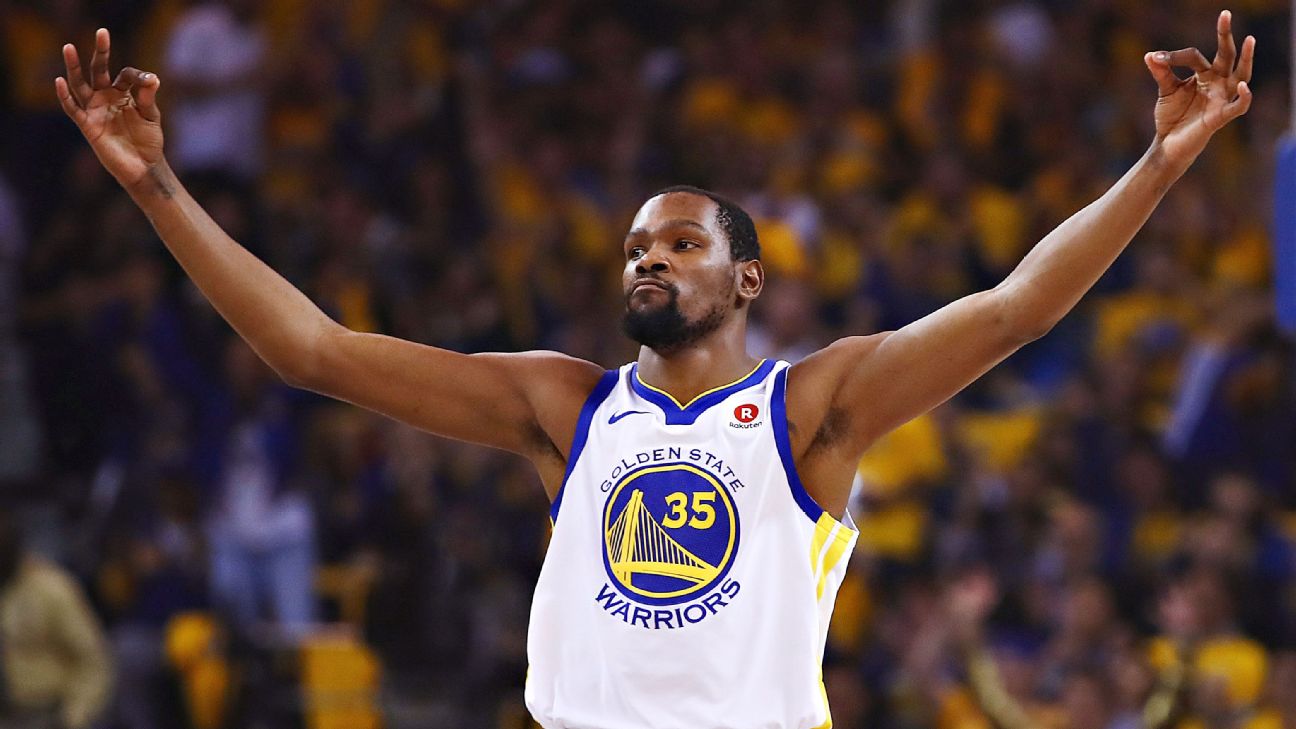 OAKLAND, Calif. -- Endings, no matter their size or scope, arrive suddenly. They do so even if they are inevitable, expected, even overdue, because endings mark time and how much has elapsed, and it always does so faster than anyone can anticipate. It seems just yesterday, after all, that Manu Ginobili and Tony Parker and the San Antonio Spurs were making one deep playoff run after another, with several ending with champagne and parades in June.

But Tuesday perhaps marked the final game for Ginobili and for Parker, who played 16 seasons together and two days earlier became the NBA's winningest playoff duo (132). And their potential departures will be followed by more questions about the future of the Spurs, who have long been the NBA's steadiest franchise but now enter an offseason fraught with uncertainty.

Following the Spurs' 99-91 Game 5 loss to the Golden State Warriors, who advanced after winning their first-round series 4-1, San Antonio will seek to mend the strained relationship with star forward Kawhi Leonard, who has been away in New York City while recovering from an injury. Some of the Spurs' top assistant coaches might take head-coaching jobs elsewhere, and it's not clear what the future holds for their current head coach, Gregg Popovich, 69, who has been away from the team mourning the recent death of his wife of four decades, Erin.

These murky issues hung heavy over the Spurs as they departed the court at Oracle Arena, but for the Warriors, the focus now moves to the New Orleans Pelicans, their second-round opponent, and to the health of star guard Stephen Curry, who is expected to return to action at some point in that series after missing the first round because of a knee sprain.

"If he doesn't play, we're prepared," Warriors swingman Klay Thompson said. "If he does play, hallelujah."

The Pelicans breathlessly swept the Portland Trail Blazers in the first round, and their brilliant play of late -- behind Anthony Davis, Jrue Holiday, Rajon Rondo and Nikola Mirotic -- makes them a considerable test, one more severe than the Warriors might have expected months ago.

"It's fun watching them play," Warriors coach Steve Kerr said. "It's not going to be as much fun playing against them because they present a lot of problems, but [Pelicans coach Alvin Gentry] has done an amazing job with the group. They have come together."

But the Warriors' series-clinching win over the Spurs didn't come easy. True to the grit and discipline that have long defined them, the underdog Spurs fought to the final seconds, keeping the outcome in question even into the final minute. Kevin Durant drilled a jumper with 36 seconds left, giving the Warriors a four-point lead, and then Ginobili turned the ball over on the next possession.

And with that, the Warriors and their fans felt relief.

"I said it before the series started -- that the Spurs always make you do the right things," Kerr said. "You will be exposed if you're not attentive and boxing out and rotating and taking care of the ball.

"This year, our team struggled going into the playoffs and the Spurs helped us kind of get our game back in terms of forcing us to defend and pay attention to detail."

Kerr also directed a message to Popovich, his former coach.

"Pop, if you're watching out there, we love you. Our whole team and coaching staff has been thinking about you every day. Your team reflected who you are tonight. They battled every step of the way and that was a big-time fight and we're lucky to get out of here."

Durant led the Warriors with 25 points. Thompson scored 24 -- including 17 in the first half -- and Draymond Green set a playoff high with 19 rebounds to go along with 17 points.

Ginobili, who turns 41 in July, finished with 10 points, 7 assists and 5 rebounds in 25 minutes. He shot 3-of-7 from the field, hitting 1-of-4 from 3-point range. He can pick up the option on his contract and return to the franchise for which he has played since 2002-03 or perhaps retire.

"I've been contemplating retirement forever," Ginobili said. "Nothing has changed. I just don't know. I'll let a month, two months go by and then I'll see how I feel. I'm not the type of guy that makes decisions on the fly, when you're upset, hurt or whatever. I usually let it sink in and see how it feels."

Said Kerr, Ginobili's former Spurs teammate: "I'm hoping that's not his last game. I just told him I hope he keeps playing because he's been just amazing for the league and so fun to watch night in and night out."

Parker, 35, tallied four points in 14 minutes off the bench. He will be a free agent this summer. He replied, "Of course," when asked if he wants to stay with the team. As for rejoining Ginobili, Parker said, "That's going to be another mystery. That's a question you have to ask him."

As they have been for much of the season with Leonard absent, the Spurs were carried by All-Star center LaMarcus Aldridge, who finished with a game-high 30 points and 12 rebounds. Patty Mills chipped in with 18 points.

The Warriors led by as much as 16 in the second half and by double digits for much of the night. Golden State jumped out to a 9-0 lead to open the game and led by 11 at halftime.

Each team shot poorly from 3-point range -- the Warriors finishing 5-of-27 from beyond the arc and the Spurs finishing 7-of-30. But the Warriors held a 21-0 edge in fast-break points, the only statistical category in which there seemed to be any sizable separation.

As the final seconds ticked off the clock, Ginobili dribbled the ball in between his legs, staring down. When the buzzer sounded and confetti started to rain down, he tossed the ball high into the air.

Warriors close out Spurs
Klay Thompson and Kevin Durant combine for 49 points, and the Warriors finish off the Spurs 99-91. 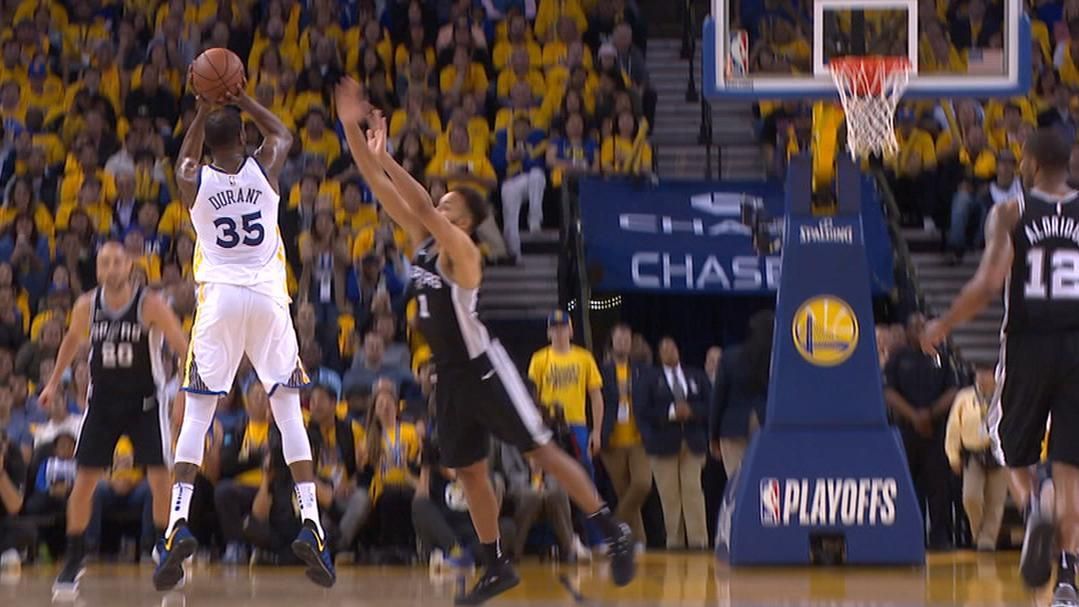 Oracle Arena goes wild after Durant triple
Kevin Durant does it all, forcing a steal on defense and draining a 3 on the other end to give the Warriors a commanding 16-point lead.
Report a correction or typo
Related topics:
sportsespngolden state warriorsfirst roundgame 5western conference playoffsnbanba playoffs2018 playoffssan antonio spurssteve kerr
Copyright © 2020 ESPN Internet Ventures. All rights reserved.
More Videos
From CNN Newsource affiliates
TOP STORIES
A day in the life of a preschool in SF amid COVID-19 crisis