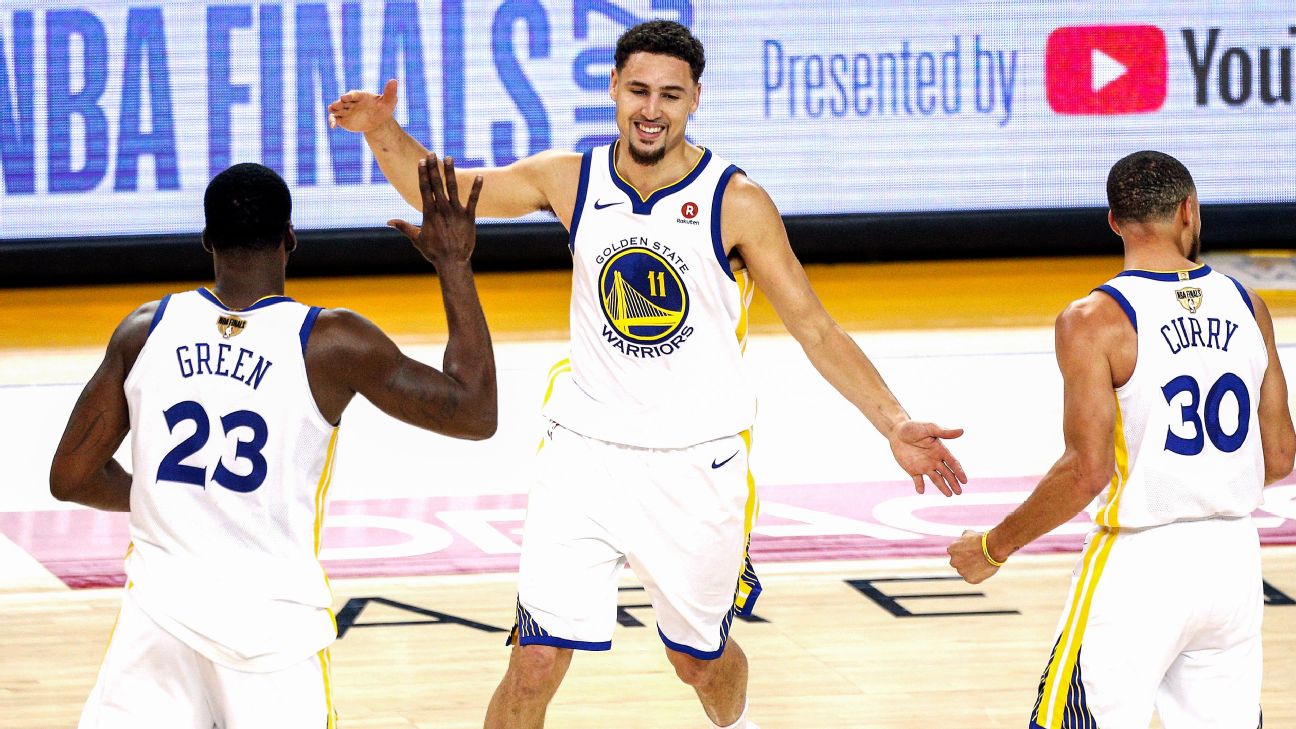 OAKLAND, Calif. -- It took a few minutes to figure out what was eating Klay Thompson. We had always had a good working relationship, so I knew it wasn't anything personal. The conversation was flowing well. He was funny and introspective and wise in that all-over-the-place way his teammates adoringly call "The Klay Thompson Experience." But during the entire interview, he just seemed a little distracted.

Finally, I noticed the paper in his right hand. He kept looking at it, the way you check your cellphone over and over when you're being careful not to miss a text.

"I have to get a new driver's license," Thompson says after I ask what the paper is for.

Is it expired? Can't you order a new one through the mail?

Perfectly reasonable. Except that, yooooo, this is four-time All-Star Klay Thompson running his own errands at the DMV -- in Oakland, a few miles from where the defending NBA champion Golden State Warriors play their home games. Can you imagine the crowd he attracts strolling in?

Brown smiles. He loves Thompson. The whole coaching staff does.

"I wish I was Klay Thompson," head coach Steve Kerr says. "I envy him. He doesn't really care what anybody thinks. But the way it manifests itself is so natural and normal. He just loves to play, he loves his days off, he loves getting outside, loves the beach.

It's not just charming, it's a key reason the Warriors have been able to become a superteam on the verge of their third championship in four years. They hold a 3-0 series lead over the Cleveland Cavaliers heading into Game 4 of the NBA Finals on Friday night.

"He could very easily have been the type of player who wanted to go elsewhere so he could have his own team, and there's nothing wrong with that," Kerr says. "But because he's not, he has no problem just playing his role. And he's so good at it. He's just a machine with his shooting and just his approach. He never, ever gets tired. He guards the opponent's best guard night in and night out, and then he runs around like Reggie Millerand makes shots."

On the court, Thompson's defensive ability makes up for the slender, 6-foot-3 Stephen Curry's physical shortcomings. Thompson is a deadly catch-and-shoot scorer who doesn't need to dominate the ball to make plays or get himself going -- essential on a team with former league MVPs Curry and Kevin Durant, who do need the ball a lot.

And then there's the personality.

"If he had a huge ego, this doesn't work," Warriors forward Draymond Green says flatly. "It just doesn't."

Those who know Thompson best say there is an ego in there. It just manifests itself differently than almost any other All-Star. He's ultracompetitive, yes, but without the chip on his shoulder.

"I have never heard Klay say, 'This is B.S. ... This guy is shooting too much, that guy won't pass, or I'm not getting enough looks,'" his agent, Greg Lawrence, says.

"If he has a bad night, Klay will say, 'I wasn't good tonight. I couldn't make anything.' Most guys would be like, 'The system sucks' or blame it on a teammate or coach."

JOEDY GARDNER COACHED Thompson in high school and at the AAU level. Back then, Thompson was just former Los Angeles Lakers center Mychal Thompson's kid andTrayce Thompson's older brother. Washington State and Notre Dame were the only colleges that recruited him with any gusto before his breakout senior season.

"I think the drive came between his sophomore and junior year, when nobody respected him," Gardner says. "He wasn't even a player to watch. Mychal would tell everyone, 'My kid's going to be good,' but I don't think anyone believed him."

Thompson channeled that drive into relentless on-court work. He'd train in group sessions with Gardner every Monday and Thursday night at the San Juan Capistrano Boys & Girls Club. Then they'd do personal sessions, scheduled and unscheduled.

"I had Klay from such a young age, it really helped," Gardner says. "And he still comes by to work. He'll just show up out of the blue at my house, like, 'I wanted to get some shots up.'"

Warriors assistant coach Chris DeMarco has worked with Thompson personally since his rookie season. By now,DeMarco is used to the texts asking him to come back to the facility at night so Thompson can get up extra shots.

"More than anything, he just loves the game. He loves playing basketball, and he loves shooting," DeMarco says. "He's like a kid in the backyard, just playing for hours."

There's a simplicity of focus in all the characterizations of Thompson that's hard to reconcile with the flaky, laid-back guy who keeps losing his driver's license.

How can a person be so laser-focused on one thing and so unfocused on everything else?

Simple. Basketball matters deeply to him. The other stuff doesn't.

"I usually wake up, go to the facility, get breakfast, get my shots up. About 100," Thompson says casually. "I'll get stretched, ice tub, maybe get Subway. Play with [my dog] Rocco in the backyard. Take a nap. Go to the arena. Have fun. Hopefully we win. It's that simple. I do that 100 times a year."

He doesn't freak out if there's any disturbance to that loose routine. Like, for instance, when he overslept and missed practice the day before the game he scored 60 points in three quarters against the Indiana Pacers last season.

"I was already an hour late once I woke up, so it wasn't worth going at that point," he says. "I could just go back later."

A QUINTESSENTIAL THOMPSON story happened last fall when a local TV reporter stopped him on the streets of New York to ask about a story on scaffolding as he was walking back from practice.

DeMarco was with Thompson when it happened and initially tried to shoo away the reporter.

"At first they're like, 'Hey, do you guys want to interview on scaffolding in New York?'" DeMarco says, laughing at the memory. "And I was like, 'No. We're good. We don't live here.' But then Klay was like, 'Sure, I'll do it.'"

The reporter didn't seem to recognize Thompson, but DeMarco says the cameraman did. And yet somehow the interview went off as your typical man-on-the-street local news story, with a very tall guy offering a surprisingly well-thought-out opinion on scaffolding in New York City.

"Yeah, I mean, it's cool to be a citizen," Thompson says.

The video went viral within hours. The legend of Klay Thompson grew.

First there was China Klay.

Then there was Scaffolding Klay.

Perhaps after this story, the internet will fall for DMV Klay. Or Wikipedia Klay.

What's that, you ask?

Everyone I talked to about Thompson mentioned how he seems to know so much random stuff. Green thought Thompson watched a bunch of Animal Planet or YouTube videos. Assistant general manager Jonnie West noted Thompson can recite lines,basically word-for-word, from all sorts of movies. DeMarco said Thompson remembers everything -- every play or thing someone says around him, even when you're not aware he's watching.

So I asked him where all that knowledge comes from.

There's no sheepishness in his voice as he explains this. No self-consciousness. He's not trying to make me laugh or spin a narrative. He's just himself, comfortable in his Klayness.

"He's like his own human," says Warriors centerZaza Pachulia, who has become one of Thompson's best friends on the team. "The first time he starts in, you're probably not going to get that as much. But when you're sharing a locker room and being with teammates ... and you've kind of collected more evidence, he's a really good guy.

IF YOU WANT a reason Thompson is so chill, it's likely his father's influence.

"That's probably his island mentality," Thompson says of his Bahamian father. "I mean, he's had the same wardrobe for about 20 years. Sweats. Fading black tees. You gotta respect it. He's resourceful."

Growing up, Thompson's parents, Mychal and Julie, were constant presences in his life, as well as his two brothers, Mychel and Trayce.

"Julie made sure the boys were best friends," Mychal says.

"He was huge," Klay says. "He would announce our Little League championship. I know he loved doing it because he'd give all the kids nicknames as they came up to the plate."

This is the kind of stuff Klay Thompson finds important. Family, friends, food, basketball. The rest of it doesn't really concern him. Or at least, it doesn't anymore.

"I used to actually get upset. Man, I should get more love," Thompson says. "Then I was just like ... none of that stuff really matters. As long as you go out there and ... you've got the best job in the world. You don't need to get gratification from the internet, or social media.

"Because you'll never find it, first of all. And you'll always find a lot of bad stuff. To me, as long as you play hard and have your dream job, shoot, I'll take that. That's all that matters to me."

Several times this season, Thompson has been asked questions or heard speculation about his impending free agency in 2019. Warriors owner Joe Lacob made a point of discussing an extension last summer while they were both in China, but it was more perfunctory at that time. The Warriors wanted Thompson to know they wanted him long term. But Golden State could only offer a three-year, $74 million extension, so everyone in the room understood he wouldn't sign anything early, not when there was still a chance he could be named to an All-NBA team and earn a larger extension the following year. Thompson did not earn All-NBA honors this season, so the Warriors will only be able to extend him for $102 million (or $85 million less than the maximum allowable).

In other words, questions about his future will likely linger into next season as he approaches unrestricted free agency, no matter how many times Thompson expresses a desire to stay.

"Everyone's like, 'Don't you want your own team? Don't you want to go be a star?'" Thompson says. "Man, winning trumps all. This is the only franchise I've ever known. It's not only about the individual accolades. Nowadays, because there's so much star power in the NBA, the team aspect kind of gets lost. But I'd rather be on a team that can make an imprint on history. We've already made an imprint, but it can be even greater. That's what drives me."

So, he'll keep shooting and Klay-ing his way through life.

Klay the unsung Warriors star
Klay Thompson's greatness can be overshadowed by his MVP teammates, but the sharpshooting guard has crafted many memorable moments of his own. 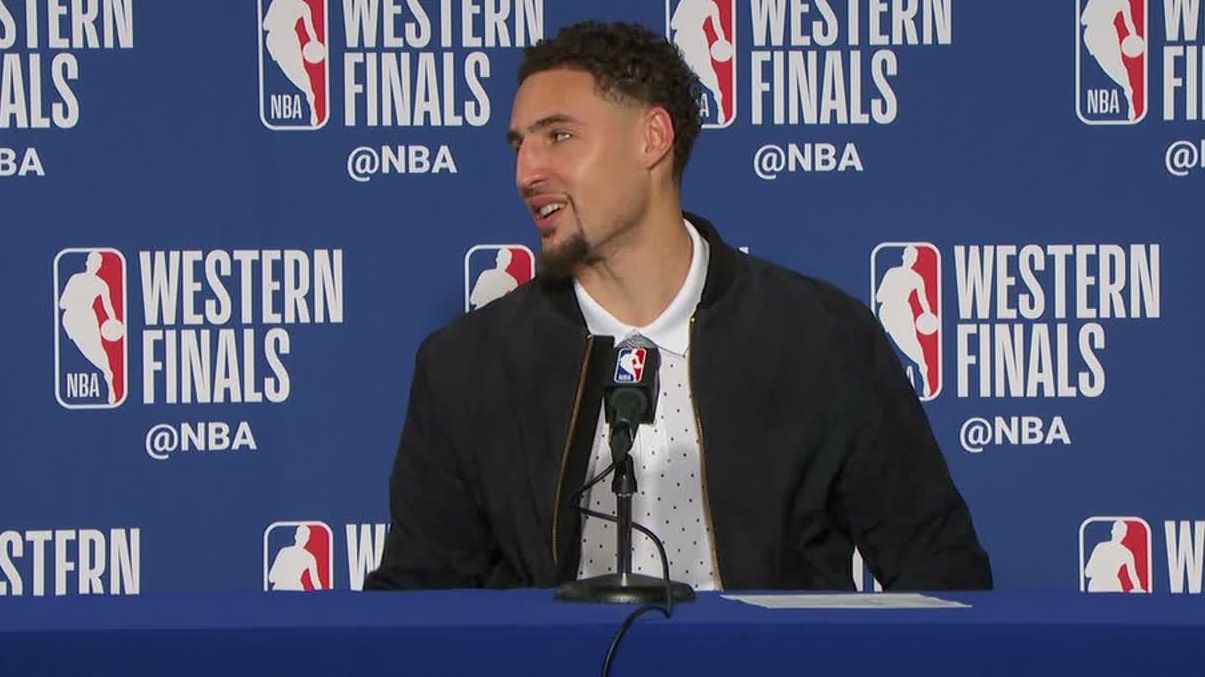