Kobe: I want another crack at Spurs 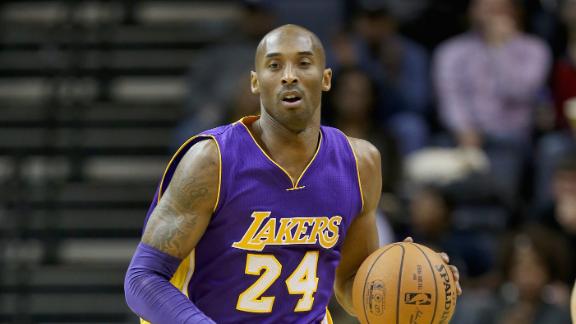 LOS ANGELES -- In the throes of a rebuilding season and surrounded by new teammates, Kobe Bryant wishes he had stability and continuity.

He wishes his situation were like that of Tim Duncan and the rest of the San Antonio Spurs, who beat Bryant and the Los Angeles Lakers93-80 Friday night at Staples Center, giving the Lakers their worst nine-game start in franchise history.

Duncan, Parker and Ginobili have all been together since 2002, winning a record 111 playoff games together, which moved them ahead of the Lakers' Magic Johnson, Kareem Abdul-Jabbar and Michael Cooper, who won 110 postseason games together in the Showtime era.

Bryant wistfully talked about the Spurs, thinking about what it would have been like with the Lakers had he, Pau Gasol, Lamar Odom, Derek Fisher and Phil Jackson -- a combination that won titles in 2009 and 2010 -- had all stuck together.

"It would be like if Me, Pau, L.O. and Phil, if we were all just here, still," Bryant said. "It's crazy. That longevity is freaking crazy."

Since 1999, the Spurs and Lakers have met seven times in the playoffs, with the Lakers holding a 4-3 edge. The teams have won 10 of the 16 NBA championships since 1999, five for each team, and Duncan could earn another ring this season, topping Bryant's total.

"I want a crack at him," Bryant said of Duncan. "I want to get another crack before it's all said and done. I would love to play the Spurs in the playoffs one more time, you know what I mean? As a competitor, you want to have the most [titles], but at the same time, it's well-deserved."

Bryant's Lakers have at least won championships in consecutive seasons, something Duncan's Spurs have yet to achieve.

"I take comfort in the fact that we've been able to do that twice," Bryant said, referring to a three-peat with Shaquille O'Neal and then the latter titles with Gasol.

"I'm not giving up any tips," Bryant said, laughing.

Bryant is in his 19th season, Duncan his 18th. The two met in 1997 while shooting a Sprite commercial before Duncan's rookie season. And while each has gone on to achieve Hall of Fame levels of success, the two couldn't be more different.

"There's two different ways of skinning a cat, two complete opposite ways," Bryant said. "He's a quiet competitor. I wear mine more on my sleeve, but he's got the same competitive fire as I do. It's been a joy to compete against him for all these years."

Does Kobe Deserve More Money Than Duncan?
Does Kobe Bryant playing in a major media hub deserve to make more money than Tim Duncan, who is in a much smaller market?