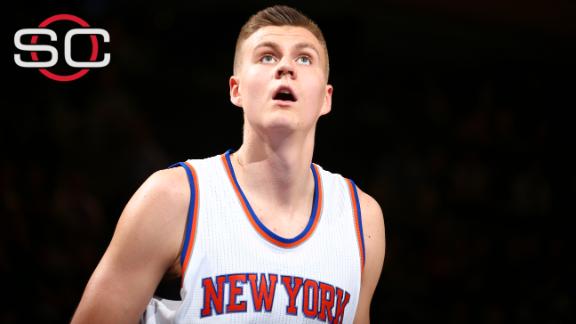 New York Knicks power forwardKristaps Porzingis will get a chance to play against his idol Monday when Dirk Nowitzki visits Madison Square Garden with the Dallas Mavericks.

"He's one of the best of all time," Porzingis told reporters. "Dirk's just amazing. I want to be as great as a shooter as he is one day, hopefully."

The 20-year-old Porzingis credited Nowitzki for creating the path to the NBA for European players.

"I'm just trying to walk in his footsteps. I would like to be as great as he is," he said.

Porzingis is Latvian, and Nowitzki is German.

The 7-foot-3 Porzingis, who has been compared to the 7-foot Nowitzki during his rookie season -- Kobe Bryant called the rookie "Dirk-like" -- will meet Nowitzki for the first time on Monday. Porzingis said he doesn't plan to seek Nowitzki out so as not to bother him, but he'll happily take any advice the Mavericks star is willing to share.

"If he has something to say to me, some advice or something, obviously, I'll listen to him," Porzingis said.