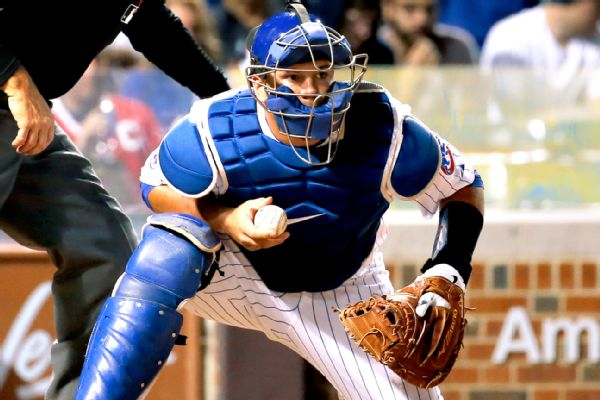 MESA -- World Series hero Kyle Schwarber will get his wish to be a catcher again but only on a very limited basis as he returns from a knee injury. Schwarber, 23, reported to Chicago Cubs camp with pitchers and catchers on Tuesday though he'll mostly be a left fielder when the team opens the 2017 season.

"We're really going to go slow with it," Cubs president Theo Epstein said Tuesday afternoon. "His primary focus is to be a left fielder. ... His future is too valuable. He has such a great impact with his bat and the person that he is we don't want to do anything that can jeopardize the length of his career."

Despite not playing a full season in the major leagues yet, Schwarber already has achieved a cult following in Chicago. He's the franchise postseason home run leader after hitting five in 2015, and he returned early from knee surgery to help the Cubs win the 2016 World Series. He went 7-for-17 after missing all but the first three games of the regular season due to an outfield collision.

"People are going to look at that and base their entire Schwarber world around those last two games but he's still coming off a really significant injury and we have to be careful with that," manager Joe Maddon said. "We'd like to see him play an entire season."

Schwarber was a catcher before being drafted by the Cubs in 2014 but converted to outfield in 2015 in order to insert his bat into the major league lineup quicker. If cleared to squat by team doctors on Tuesday, Schwarber will perform physical catching duties only 1-2 times a week, Epstein said. He'll still learn the game from a catcher's standpoint while also working on his defense in left field. The ultimate plan is for him to be ready as a third/emergency catcher by Opening Day.

"I'm going to embrace what they put out for me and take it head on," Schwarber said Tuesday morning. "I still have the passion for catching but if it's not medically smart then don't risk it."

Schwarber will wear a brace on his left knee for the entire season but the Cubs think he's already moving well in the outfield. He'll just have to take it slow behind the plate.