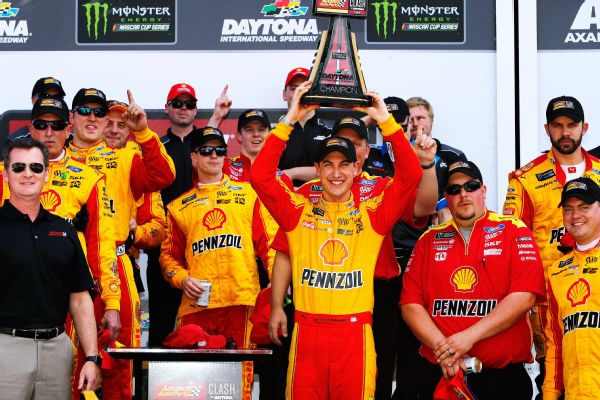 DAYTONA BEACH, Fla. -- The real clash at Daytona came when Denny Hamlin and Brad Keselowski wrecked on the final lap.

That was just the opening Joey Logano needed to get Ford to victory lane again at a superspeedway.

Logano stole a win in the Clash at Daytona on Sunday, driving around the crashing leaders to land NASCAR's first trophy of Speedweeks. It was Ford's fourth consecutive win at a restrictor-plate track, and with four additional cars in the fold thanks to Stewart-Haas Racing's move from Chevrolet, the manufacturer known for its blue-oval logo might just be the one to beat heading into the season-opening Daytona 500.

"One car alone was not going to win this race," Logano said. "Didn't have a shot just because the (Joe Gibbs Racing) cars and the Toyotas were way too committed to each other. It's going to take a lot more than one guy to beat them."

Hamlin led much of the 75-lap exhibition event, which was postponed a day because of rain, but lost control while trying to block Keselowski just after taking the white flag for the final lap. Logano slid by on the outside as Hamlin and Keselowski slowed.

It was Logano's first Clash victory in nine tries and his third overall win at Daytona International Speedway. This one came in NASCAR's first race of Speedweeks.

Kyle Busch finished second, following by Alex Bowman and Danica Patrick. Bowman drove the No. 88 Chevrolet in place in Dale Earnhardt Jr., who felt Bowman earned the opportunity because he filled in for Earnhardt (concussion) last year.

"It means a lot to have driven this car for Team Hendrick," Bowman said. "It's been a lot of fun, made a lot of memories. Hope to do it again someday."

Hamlin and his Joe Gibbs Racing teammates looked like they would celebrate a clean sweep for Toyota. Hamlin, Suarez, Matt Kenseth and Busch were running 1-2-3-4 down the stretch. But Keselowski, Logano and new Ford driver Kevin Harvick teamed up to break up the four-car pack.

Keselowski got a big run down low and looked like he would move to the front, but Hamlin swerved to block him and created contact that allowed Logano swipe a win.

"I knew the only way we were going to beat those Gibbs cars -- they're so good at being a team -- was to break them up," Logano said. "You've got to be a better team than they are. We showed that Ford was the better team today. We were able to break them up and get ourselves up front and make the big move up there at the end."

Team Penske and Ford have now won four in a row at NASCAR's high-banked tracks. Keselowski won at Daytona last July, and he and Logano each won races at Talladega Superspeedway in 2016.

With SHR teammates Harvick, Patrick, Kurt Busch and Clint Bowyer now part of Ford, Logano and Keselowski have more options at places where teammates matter most.

"Obviously, that alliance has gotten stronger with us having the same manufacturer," Logano said.

With a 17-car field, the Clash hardly provided more than a glimpse into what to expect in the Daytona 500. It surely showed that Ford and Toyota have the most speed.

It also exposed some flaws for others.

Defending series champion Jimmie Johnson lost control twice in Turn 4, taking out Kurt Busch in the first one and then totaling his No. 48 Chevrolet in the second.

"It's bizarre, because it drove really good everywhere else," Johnson said. "We will take some notes and learn from those mistakes and apply that to the (Daytona) 500 car."

"It's kind of a shame," he said. "All of the hard work and the effort everybody puts into the offseason -- Doug Yates and his engines and everybody from Ford and everybody at Stewart-Haas -- all of the effort put toward building a car and we didn't even make it to the first pit stop. So it's kind of a bummer."
Related topics:
sportsespnnascarclashjoey loganokyle buschkevin hamlindaytonabrad keselowskimonster
Copyright © 2020 ESPN Internet Ventures. All rights reserved.
More Videos
From CNN Newsource affiliates
TOP STORIES