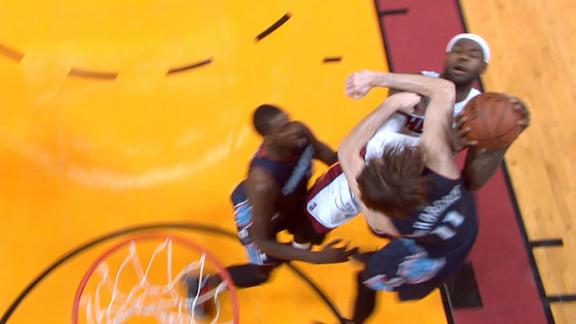 MIAMI -- The Heat believe that the NBA didn't go far enough in punishing Charlotte Bobcats forward Josh McRoberts for his hard foul on LeBron James during Miami's win in Game 2 of their first-round playoff series.

Heat coach Erik Spoelstra said Friday the team wasn't satisfied with the league's decision Thursday to fine McRoberts $20,000 and upgrade what was ruled a common foul during Wednesday's game to a flagrant 2 penalty for excessive contact. McRoberts was not suspended and will be available for Game 3 on Saturday in Charlotte.

McRoberts fouled James with 50 seconds left in the game on a play in which he extended his elbow into James' neck to prevent him from converting a layup. James fell to the court and rubbed his neck for several moments before he got to his feet and made one of two free throws.

"We're all fortunate, because that play could have been much worse, and it's not the first time this has happened," Spoelstra said after practice of what he believes has been a pattern of hard fouls on James throughout the season. "We've already expressed it with the league. We disagree with this. But you have to move on and control what you can control. We've had dialogue. They made their decision."

Had McRoberts been assessed a flagrant 2 during the game, he would have been ejected under league rules and the Heat would have gotten possession after James' two free throws. Miami led by three at the time of the foul and held on for a 101-97 victory in a series that's been tougher for the two-time defending champions than many expected.

James has averaged 29.5 points and 7.5 rebounds through the first two games of the series and has attempted 22 free throws, nearly three times as many foul shots attempted by any Charlotte player. He said he will continue to be aggressive and attack the basket as the Heat look to take a 3-0 series lead.

But James also said he's been displeased with what he feels has been repeated excessive contact from defenders to prevent him from getting to the basket. Earlier this season, James's nose was broken when he was struck in the face by Oklahoma City forward Serge Ibaka on a dunk attempt. No foul was called, although James annually ranks among the league's leaders in free throw attempts.

McRoberts said immediately after Wednesday's game that he did not intend to extend his elbow toward James' neck and that the contact appeared much worse than it was. On Friday, James said he's moved on from the play and would continue to focus on leading the Heat to a series win.

James also said his biggest challenge is to maintain composure and avoid retaliating against hard fouls.

"I mean a lot to our team," said James, a four-time league MVP. "Obviously, the game is different [today]. If this was the 1980s, I'd come up swinging. But this is not the '80s. I can't do that. Me being out of the game, it hurts us more than it's going to hurt the other team. I've got to keep my composure. I get frustrated at times, but I understand how much I mean to this team."

James said that expressing his displeasure with hard fouls doesn't mean he's trying to court favor with the league or officials. Speaking after Friday's practice, James said he noticed several flagrant fouls have been called on the spot during other playoff games already.

Game referees then have the option to review the play in question and either uphold the call or downgrade it to a common foul. James' biggest complaint is that the foul by McRoberts wasn't initially handled the same way, considering he was hit above the shoulders with excessive force.

"I understand there's going to be contact, and if it's the right call, then I'm OK with it," James said. "My foul didn't even get checked. It was never checked, and it was at a crucial point of the game.

"I don't cry for fouls. I know it's going to be a big headline tomorrow, 'LeBron is crying for fouls.' It's not that at all. If the game is played and [officiated] how it's supposed to be [officiated], then I'm OK with it."

LeBron Frustrated, Needs To 'Keep Composure'
Michael Wallace discusses LeBron James frustration with taking hard fouls and why the Heat should staying focused on dispensing the Bobcats as quickly as possible.