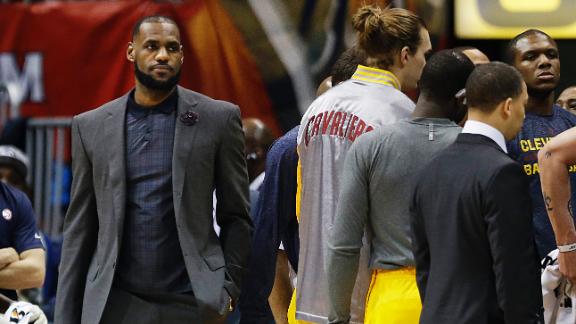 CLEVELAND --LeBron James says he's on schedule halfway through what the Cavaliers called a "multimodal approach" to rehabilitate strains to his lower back and left knee while keeping him out of the lineup for two weeks.

"I feel good," James said before the Cavs' 105-93 loss to the Houston Rockets on Wednesday. "But I'm on a program right now. I feel good. Week 1 is complete and I got one more left they say."

James has missed six straight games with his injury and said he's spent the time rehabbing three or four times a day with his trainer, Mike Mancias.

That streak could conceivably end at nine games if James returns for the tail end of the Cavs' upcoming five-game road trip beginning Friday in Golden State.

"If everything continues to go well, I'm on target, I'm on pace, I'm feeling better every day," James said. "So, it's been a good first week."

"Our initial time table appears to be accurate at this point," Griffin said. "We're still looking at that same two-week window. Optimistic that we may have him back on the court in time for the Laker game. He will travel with the team to the West coast and I know is really excited about being back with his teammates."

While James admitted he "of course" would have been able to play the last week had it been playoff games, the 12-year veteran said it came to a point of diminishing returns fighting through his injuries.

"I'm stubborn about playing basketball," James said. "I just love the game. I hate missing games. You just look at my record and my resume of missing games, it's been one of the toughest things for me. But I just had to listen to my body, listen to the docs, listen to my trainer and that's what we came up with."

James is averaging 25.2 points, 7.6 assists, 5.3 rebounds and 1.3 steals per game while shooting 48.8 percent from the field this season. But the four-time MVP said he could still feel his game deteriorating.

"I finally just listened to my body ultimately," James said of the decision to rest. "I was affecting my game and once I start seeing my game being affected by my stubbornness, then I just had to look myself in the mirror and understand I had to do what's best for me as well. So it was one of the hardest but smartest decisions I've made."

The Cavs have gone 1-5 during this current stretch without him and 1-7 overall sans James this season.

James said the rest is starting to pay off for him personally, however.

"I haven't felt great all year," James said. "I've had spurts where one or two games I've felt good and after that I was just pushing through it, just being the competitive guy I am and wanting to be out there for my teammates. So, I feel better right now than I've been for the majority of the season."

James has yet to do any basketball-related activity during his rehab, but that will change on the West Coast road trip.

"Dr. Parker and his team have a plan in place that will involve ramping up to court work," Griffin said. "I don't have any idea what day that is, and I don't think they necessarily do either. I think we're going to see how he responds to each step along the way. I would rule him out of anything leading up to that point, but I think from the very beginning that two weeks is sort of a baseline minimum. We certainly don't anticipate anything earlier than that."

Leaving Wednesday's high of 19 degrees in chilly Cleveland is certainly part of James' thought process to attend the first leg of the Cavs' trip through San Francisco, Sacramento and Phoenix before possibly being ready to play in L.A.

"It helps that we're going to some warmer cities so my body could use that as well," James said with a smile.

Griffin also provided an injury update on the newly acquired Iman Shumpert, who has been out since Dec. 12 with a dislocated left shoulder.

"He will begin doing therapy that is not contact related," Griffin said. "He was doing contact (drills) in New York. Our medical staff feels like that was a little aggressive. So we're going to try to get him to a point where we get him through practices before he sees game action, but we do anticipate that he's two to three weeks away."

LeBron On Target To Return
LeBron James discusses his treatment for strains to his lower back and left knee.