ESPN
By Pierre LeBrun
SAN JOSE, Calif. -- It was in that moment of the lowest of the lows that a player who rarely invites the world behind the curtain let his guard down for one brief second.

Fresh off a Game 7 loss that capped a 3-0 series collapse to the rival Los Los Angeles Kings in the opening round of the 2014 playoffs, the face of the San Jose Sharks for almost two decades was asked how this defeat would feed into the perception of his team being perennial playoff underachievers.

"You don't usually agree with it but then you do something like this, and it's not easy to take, you know?" Marleau, the longest-serving Sharks player on the club, said in a moment of unvarnished truth that April night two years ago.

Imagine, it was suggested to him Tuesday, had someone whispered in his ear that very night that only two years later the Sharks would be one win away from the Stanley Cup finals.

"I would have took it from you," Marleau said, smiling, Tuesday.

It's right there for the taking. One more win over the St. Louis Blues on Wednesday (9 p.m. ET) in Game 6 of the Western Conference finals and the Sharks are off to their first Cup finals appearance in their 25-year history. Marleau has been here for 19 of them.

He has been here for the good -- four trips to the conference finals and a ton of playoff games -- and the bad, the first-round loss to the No. 8 Anaheim Ducks in 2009, the soul-crushing collapse to the Kings in 2014 and overall just the inability to turn any of those great teams over the past dozen years into a Cup finalist, let alone a champion.

These conference finals are going to have a feel-good ending no matter if the Blues or Sharks prevail -- so many people around the hockey world are cheering on people in both organizations after the long, heartbreaking playoffs of the past for both clubs.

Marleau and teammate Joe Thornton, the two who have always bore the brunt of this team's playoff struggles, are among those so many former teammates and rivals hope to see in the winner's circle because of the difficult journey it has been.

For Marleau, his journey here began in June 1997 when then-Sharks GM Dean Lombardi drafted him second overall. You can certainly add Lombardi among the many people admiring what's happening with Marleau and his team, despite the fact his Kings are heated rivals.

Reached by phone on Tuesday, Lombardi talked about the perseverance that both Marleau and the Sharks organization have shown over the years.

The way Lombardi sees it, it could easily have been the Sharks who won the Cup two years ago instead of his Kings. And he wasn't alone -- Lombardi said Kings coach Darryl Sutter said before Game 1 that whichever team won that series would win the Cup.

"And he turned out to be right," Lombardi said. "A lot of times in the playoffs the real [Cup] matchups are really early or maybe in another round. But that Sharks team there could have easily won a Cup then. But what you got to admire is that they didn't panic or anything, they kept persevering. You credit ownership for not panicking, they readjusted.

"And I think Patrick is a microcosm of all that. He's gone through hard times, there were some setbacks, but I think it's a lot of credit to him and from top on down in that organization. A lot of organizations would have blown it up, the owner would have got rid of everyone or whatever, they didn't do that. I think that's a good lesson for everybody. It's a lesson of perseverance from both ends. It's pretty good."

Well, it certainly hasn't been smooth. There have been a few captain changes, first Marleau losing the "C" in 2009 and then Thornton in 2014.

And early this season, rumblings that Marleau never confirmed but other sources did that he was open to a change of scenery. A trade never materialized.

"Yeah, I'm happy where I'm at right now. Things are going good," Marleau said Tuesday, when asked about how throughout the trades the team has made the last few years, he wasn't one of them.

Instead, the two-time Olympic champion with Team Canada has a realistic chance to win a Stanley Cup with the only NHL team he has ever played for.

"It would be huge, it's something I've always wanted to do here for the fans and for the Bay Area," he said in his typical soft-spoken way. "They've been supporting us over the years and they deserve it." 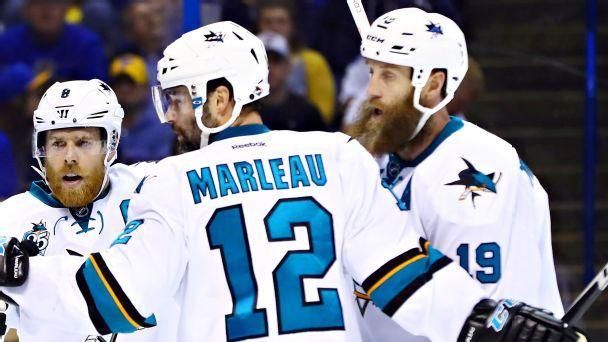 Sharks looking to close out Blues at home
Craig Custance and Pierre LeBrun discuss what a trip to the Stanley Cup finals would mean for Patrick Marleau and Joe Thornton and how coach Pete DeBoer has the Sharks in the right mental mindset for Game 6.