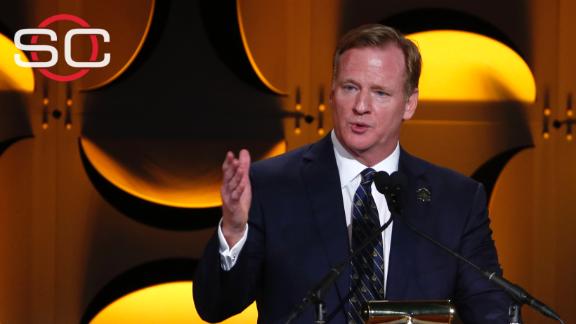 SCHAUMBURG, Ill. -- While no decisions were made on the future of the NFL in Los Angeles, Oakland, San Diego or St. Louis on Tuesday afternoon, the league took another step toward a resolution.

During the course of a meeting that lasted about five hours at the Hyatt Regency here northwest of Chicago, relocation to Los Angeles was the only topic on the docket.

No votes were taken but progress was made, according to commissioner Roger Goodell.

"Our objective coming into it was to make sure that every club understood exactly what was going on with the Los Angeles proposals, what was going on in each of those three markets," Goodell said. "And also to give them a little bit of an understanding of how we are thinking about the process and the timeline from here, including getting feedback from the clubs with respect to their views and information they need to make the right kinds of decisions consistent with our relocation policy."

The meetings were a closed-door affair, with only NFL owners and other team representatives in attendance, in addition to Goodell and Eric Grubman, the NFL executive in charge of handling matters relating to relocation.

According to the day's agenda provided to reporters, Tuesday's meetings were split up into two parts. In the morning session, the league started by presenting the progress on potential stadium projects in Oakland, San Diego and St. Louis.

Carmen Policy, representing the San Diego Chargers and Oakland Raiders, then joined representatives from Goldman-Sachs in presenting the Carson proposal.

Grubman offered updates on what was happening in the home markets when it comes to getting new stadiums built. Grubman said St. Louis is making the most progress with San Diego second and Oakland lagging far behind.

"With respect to St. Louis, they have made consistent progress over quite a number of months," Grubman said. "They described that process themselves. There is a litigation threat. They are continuing to assemble the land and their financing strategies do have to be finalized. So risks remain."

Grubman said San Diego presented its latest plan to the six-person committee on Los Angeles opportunities Monday afternoon and that information was then shown to the full ownership group Tuesday.

"That proposal evidenced a significant amount of progress in terms of putting together something which is beginning to be defined," Grubman said. "They also went through the strategy for dealing various risks and threats, it could be a litigation threat over environmental permitting and certifications, there could be threats from the standpoint of obtaining the necessary public support that the mayor has called for and so forth and so on. There were a lot of questions about that and those questions remain open."

Meanwhile, Oakland has yet to present much of anything.

"The facts on the ground are is that there has been no viable proposal that's been made to the Raiders," Grubman said.

Scott McKibben, the Alameda County Coliseum Authority Executive Director, said Tuesday in a telephone interview with ESPN after Grubman's comments that the deadline for developer Floyd Kephart's plan for a new stadium and real estate venture in Oakland is Aug. 21.

Policy said he revealed to the owners that the Carson proposal accounts for eight acres allotted for the NFL rent-free to use as it pleases for things like a home for the NFL Network. He also alluded to four points of emphasis on what he believes makes Carson the best Los Angeles project.

Those four points include the logic in a California-based solution for two teams already in California who have never left the state.

It also includes a belief that Carson offers the best location from a logistical standpoint and turning Southern California into a "megamarket" that stretches from Santa Barbara to Mexico.

While Policy was speaking to the media, Kroenke and Demoff were offering their own 45-minute presentation to the league. Known for his public silence, Kroenke took part in the presentation that Demoff described as a team effort.

Unlike Carson, where Policy is the designated face of the project, there's been no such public push for the Inglewood project. In fact, the Rams still have yet to come out and say anything nearly as definitive as Policy.

"Like the other project, it was a chance to show the owners the NFL's opportunities in Los Angeles and what can be done," Demoff said. "I don't think there was a specific message."

After the group reconvened for the afternoon session, representatives of the Rams, Chargers and Raiders were excused from the room so the rest of the membership group could discuss what they heard in the morning sessions.

Grubman said the owners also took time to discuss possible relocation fees, though no definitive number was offered, and the possibility of starting a seat deposit campaign for Los Angeles before any team is set to relocate.

There is still no official timeline on when something will finally be decided and though some have pointed to the next round of owners meetings in October, Goodell, Policy, Demoff and others said the process probably wouldn't reach a conclusion sooner than later.

Information from ESPN.com's Bill Williamson was used in this report.

Goodell, NFL looking for right solution in Los Angeles
NFL commissioner Roger Goodell comments on the possibility of a franchise being relocated to Los Angeles.