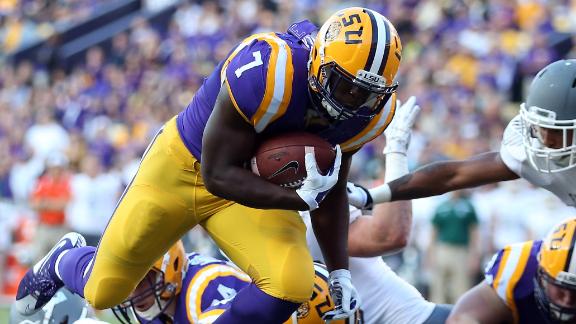 BATON ROUGE, La. --LSU's Leonard Fournette sounded more inclined to criticize his own leadership skills than take credit for a feat unmatched by any of the great Southeastern Conference running backs who came before him.

Fournette highlighted his third straight 200-yard game with a 75-yard touchdown run, and No. 9 LSU overcame a fitful performance to beatEastern Michigan44-22 on Saturday night.

Fournette finished with 233 yards and three touchdowns on 26 carries to remain among the top contenders for the Heisman Trophy. The 6-foot-1, 230-pound sophomore also became the first player in SEC history to rush for 200-plus yards in three straight games.

"I really don't care about stuff like that," Fournette said about his singular place in SEC history. "Overall, we are really just disappointed in our performance. We came out sloppy."

Fournette's remarkable three-game stretch sets him apart even from past Heisman winners Herschel Walker and Bo Jackson, but the LSU star said, "I would never compare myself to those guys. Those are legends."

Fournette was most expressive when discussing his disappointment over how difficult it was for LSU, a six-touchdown favorite, to put the Eagles away.

"We took them lightly because of their record, because they never did anything," Fournette said. "That's on the leaders. That is our fault. We didn't stop the laughing that was going on in practice, so we have to pick it up this week."

As dominant as Fournette was, some might have expected even more against the Eagles (1-4), who came in allowing a nation's-worst 373.2 yards rushing per game.

The Eagles stacked their defense to stop the run, but the Tigers (4-0) struggled to cash in through the air. LSU quarterback Brandon Harris was 4-of-15 for 80 yards with one interception.

"Certainly, we were not perfect," LSU coach Les Miles said. "I wish we had not dropped balls, but we'll work on that again and I'll reaffirm that desire to throw and catch."

Fournette has 11 touchdowns in four games -- one more than he had all of last season.

LSU led 20-14 at halftime, during which senior right tackle Vadal Alexander challenged his teammates to raise their intensity.

Fournette then broke his long scoring run around the left end on the first play of the second half, and Miles was among the least surprised to see it.

"Leonard's liable to do that at any time," Miles said. "There's not a time you hand him the ball that he doesn't have the opportunity to hit a home run."

Fournette reached his final rushing total when he scored on an 11-yard run to make it 37-22. That left him 18 yards short of surpassing LSU's single-game record of 250 yards, set by Alley Broussard in 2004. But before LSU could get the ball back on offense, linebacker Deion Jones returned an interception 26 yards for a score. Miles then gave Fournette the rest of the night off.

"He's a team player, so if the coach wants him to come out 1 yard from a record, he's fine with it. Trust me," Alexander said.

EMU's Brogan Roback was 17-of-24 for 161 yards and one TD but was intercepted three times. Eagles top rusher Darius Jackson carried 19 times for 66 yards and a TD.

EMU coach Chris Creighton wanted his players to take some satisfaction from their efforts.

"The heart and passion we played with, I'll take that every day," Creighton said. "I just told my guys in the locker room that I'm proud of them, and I really am. It's sometimes hard to say after a loss."

LSU appeared to be on its way to meeting oddsmakers' expectations when it raced to a 14-0 lead in the first quarter on Fournette's 3-yard run and Harris' 21-yard keeper.

But the Tigers lost some steam after that. Roback delivered a poised pass while being hit, resulting in Sam Browning's 30-yard reception to the LSU 6 to set up Shaq Vann's TD run.

Soon after came LSU's first turnover of the season when Harris was hit as he started to throw deep in LSU territory. The ball popped up and was caught by defensive end Luke Maclean and returned to the 3. Jackson plowed in from the 1 to make it 17-14.

Trent Domingue increased LSU's lead to 20-14 with a career-long 45-yard field goal seconds before halftime, but only after Dural uncharacteristically dropped a third-down pass near the goal line. 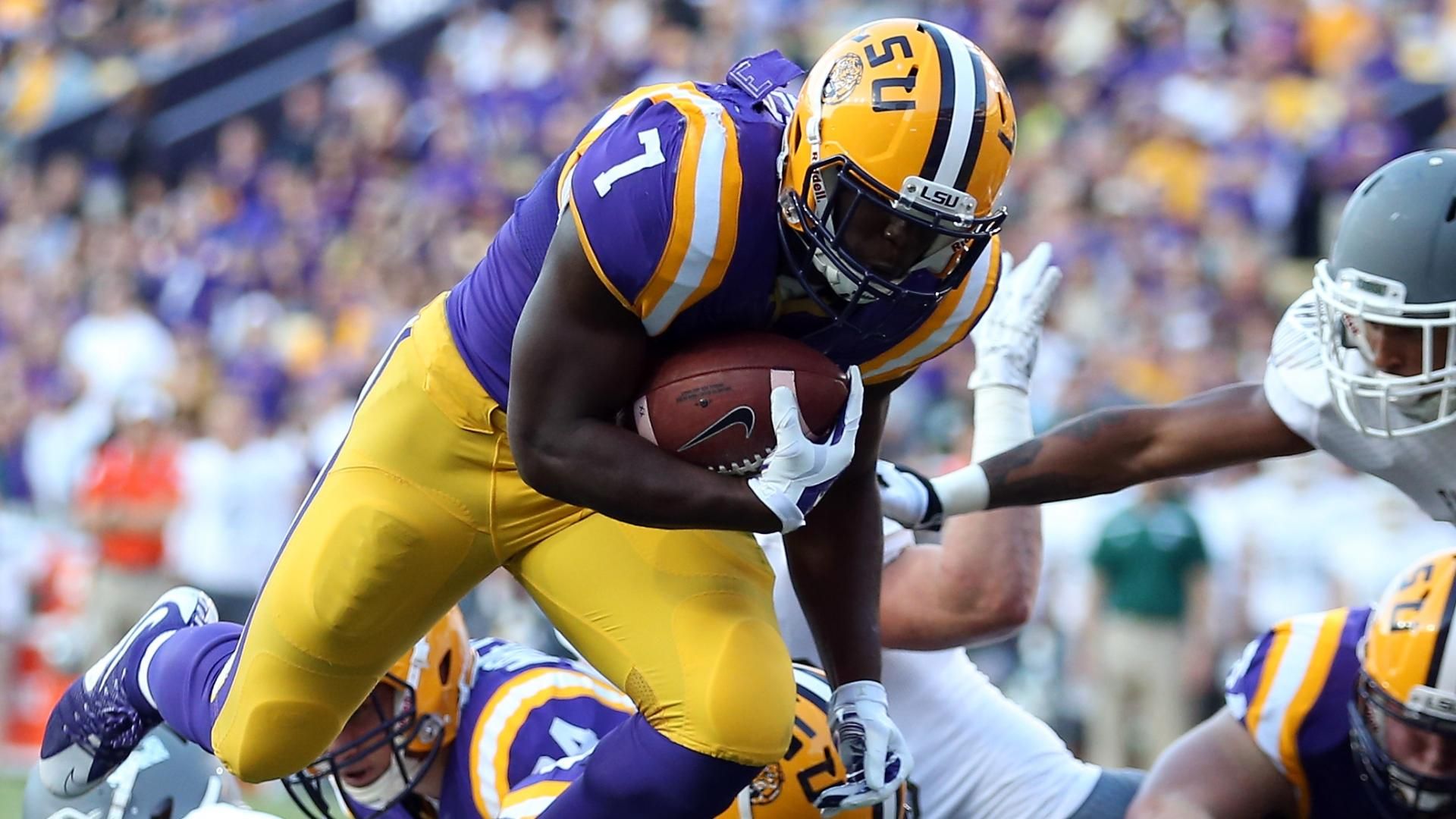 Fournette, LSU race by Eastern Michigan
Leonard Fournette posts another monster game with 233 yards on the ground with a trio of touchdowns.