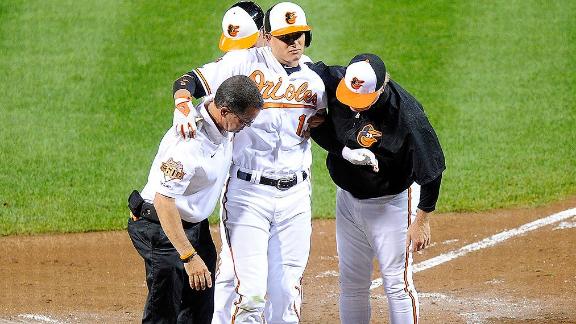 The Baltimore Orioles have placed third baseman Manny Machado on the 15-day DL with a right knee ligament sprain, the team announced Wednesday.

Machado fell to the ground after taking an awkward swing during Monday's game against the New York Yankees. He was helped off the field.

An MRI on Tuesday revealed no structural damage.

It will be Machado's second stint on the DL. He started the season there while recovering from offseason surgery on his left knee.

The move was retroactive to Aug. 12, and the Orioles called up infielder Cord Phelps from Triple-A Norfolk. To make room on the 40-man roster, catcher Matt Wieters, who had Tommy John surgery on June 17, was transferred to the 60-day DL.

Chris Davis started at third base for the Orioles on Wednesday. He replaced Machado on Monday and has 74 games of major league experience at the position.

Machado: 'Not As Bad As We Thought'
Orioles third baseman Manny Machado addresses landing on the 15-day disabled list with a right knee ligament sprain.