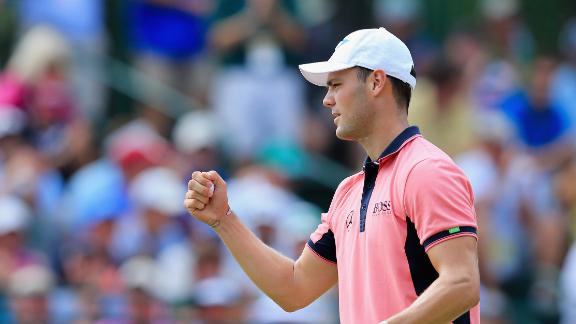 PINEHURST, N.C. -- A tough Pinehurst No. 2 tried to make a game out of this U.S. Open. Martin Kaymer always had an answer.

Already with one bogey on his card, Kaymer's tee shot on No. 4 was so deep into the trees that his golf ball settled in sandy patch that had been washed out by rain, stacked up against 6 inches of pine straw. With nowhere to go and no relief available, he turned to USGA President Tom O'Toole and said, "If you have a way to play it, I'll follow you."

Kaymer navigated his way out of trouble just fine.

He escaped with a bogey by getting up-and-down from 165 yards. He followed with an eagle with a 7-iron from 202 yards out of more sand and weeds. And a birdie on the final hole gave him a 2-over 72 and a five-shot lead in a U.S. Open that finally lived up to its reputation Saturday.

Now he has to do it one more time, with a different cast of challengers behind him.

Rickie Fowler, with teen idol status in American golf, birdied the par-3 17th hole and shot 67 to get into the final group of a major for the first time.

Even more unlikely was the other player at 3-under 207 -- Erik Compton, the two-time heart transplant recipient who considers it a victory just to be playing golf. Compton ran off five birdies and an eagle for a 67

"If I were to win the tournament, it would be obviously something that would be extremely special, not only for me, but for my family and for those who have been around me, and I think also for the community and those who have been through some tough times," Compton said. "I might just sail off and never play golf again."

Even so, this tournament is in the hands of a 29-year-old German who kept his cool on a broiling day of some wicked pin positions.

Only one player in U.S. Open history has lost a five-shot lead in the final round, and that Mike Brady in 1919.

"It would be nice if they make it difficult again," Kaymer said of the pins, several of which were on the edges of the Donald Ross turtleback greens. "Because then it's all about ball-striking. I enjoy playing those courses a lot more than just a putting competition. ... So I hope they put them in tough positions. Not as tough as today. It would be nice if we could have some kind of a chance once in a while. But that is what you get at the U.S. Open. It's OK. You just have to play very well."

Only six players remained under par, and considering no one has come from more than seven shots behind in the final round to win a U.S. Open, they might be the only ones left with a realistic chance to catch Kaymer.

Dustin Johnson and Henrik Stenson each shot 70 and were at 2-under 208. Brandt Snedeker had a 72 and was another shot behind.

Asked how much that birdie mattered on the 18th hole, Kaymer said, "One shot."

"If you're four shots, five shots, six shots, if you play a golf course like this, it can be gone very quickly," he said. "You could see it today. So the challenge tomorrow is to keep going and not try to defend anything. So we'll see how it will react tomorrow, how the body feels and how I handle the situation."

Kaymer had his way with a softer, gentler Pinehurst No. 2 by becoming the first player to open with 65s to set the 36-hole record at 10-under 130. Some players wondered what tournament he was playing.

There was no doubt what it was on Saturday.

"They've set it up so that no one can go low," Retief Goosen said after a 71. "Some of the pins look like they're about to fall off the greens."

Toru Taniguchi shot an 88. Brendon Todd, playing in the final group with Kaymer, had a 79.

Phil Mickelson had a 73 and was 13 shots out of the lead. He'll have to wait until next year to pursue the only major keeping him from the career Grand Slam. Adam Scott, the world No. 1, made bogey on all but one of the par 3s and was 11 shots behind.

He ended an amazing streak of 29 holes without a bogey by failing to get up-and-down from short of the second green. Trouble really was brewing on the fourth hole, when he pulled his tee shot into the trees and couldn't play his next shot.

After being denied relief, he took a one-shot penalty drop and punched out to the fairway. From 165 yards, he hit his fourth shot to 15 feet right of the flag and lightly pumped his fist -- big emotion for Kaymer -- when it dropped for bogey.

The other mistakes were sloppy. Kaymer hit a birdie putt off the green on the par-3 sixth and had to scramble for bogey. On the back nine, he twice took three putts for bogey, once from off the green.

But he closed with his best shot of a long day, and still had control of this U.S. Open.

Mike Brady is the only other player to lose a five-shot lead. That was in 1919 at Brae Burn Country Club in Massachusetts. He shot 80 in the last round, and Walter Hagen beat him the next day in a playoff.

Kaymer is all about looking forward, not back at history, hopeful of winning his second major before turning 30. In the last 20 years, only Tiger Woods, Rory McIlroy and Ernie Els have done that.

Kaymer Still In Lead After Third Round
Martin Kaymer shot a 2-over 72 in the third round to maintain a 5-stroke lead heading into the final round of the U.S. Open.