Matt Chapman: 'Disrespectful' of Juan Graterol to stare down A's 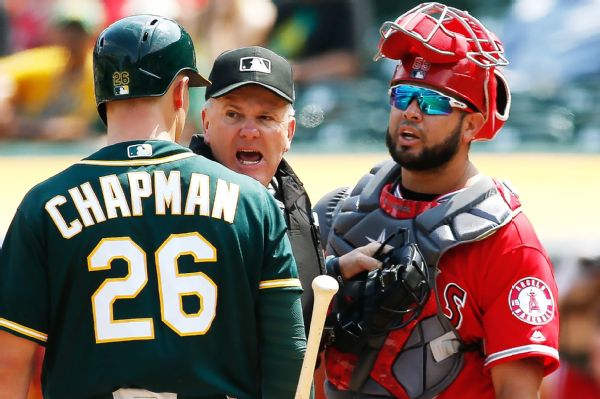 Graterol said he took exception to A's batters peeking back at him as he gave signs to the pitcher. Chapman, meanwhile, accused Graterol of staring down hitters in an effort to intimidate them.

They confronted each other as Chapman came to bat in the fourth, prompting home plate umpire Mike Everitt to step in and separate the two players. Chapman was ejected after he continued to talk to Everitt.

"The way I looked at it I wanted to stand up for my teammates and stand up for myself," Chapman said. "Even though we're a young group of guys I feel that we do deserve to be treated just like anybody else in the big leagues and respected by our opponents."

Graterol said he had warned A's outfielder Mark Canha in the second inning about looking back at his signs to the pitcher.

He stood by his assertions after the game, which the A's won 3-1.

"He told me, 'We're not looking at the signs,'" Graterol said of Chapman. "I said, 'I believe you are because I saw it.' That was it. Then he talked back to the umpire after the umpire told him it was over, and that's when he ejected him, because he didn't shut up."

Chapman said he felt Graterol was being "disrespectful" in alleging the A's batters were trying to steal signs.

"That's not a very comfortable feeling having the catcher stare at you when you're digging into the box," Chapman said. "A little disrespectful, to be honest, so when I got into the box I just let him know that we weren't stealing their signs and that there was no need for him to be staring at us. ... He obviously didn't take kindly to those words, and the umpire said that it had been handled and he came in between us, and that's when things came together, and then obviously the rest is history."

Graterol's sign-stealing allegations came one day after Major League Baseball confirmed the Boston Red Sox used electronic communication from the dugout to steal opponents' signs and relay them to Boston players during games. The league's investigation of the Red Sox is ongoing, but commissioner Rob Manfred said Tuesday that he expects it will be completed before the end of the regular season.

Manfred said the league does not have a policy against sign stealing, per se, but emphasized the issue with the Red Sox was the use of an electronic device in the dugout, which is against league rules.