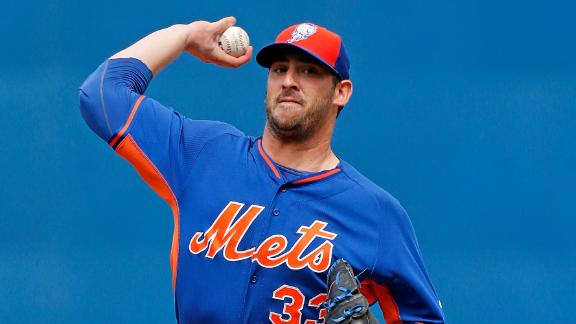 The Mets' ace retired all six Detroit Tigers batters he faced and topped out at 99 mph with his fastball on Friday at Tradition Field. It marked Harvey's first game since Aug. 24, 2013. He underwent Tommy John surgery two months later and missed all of last season.

"Things felt so good that the fact that I did have surgery is completely out of my mind," Harvey said.

The atmosphere resembled more closely the playoffs than an early spring training game, with a sellout crowd and considerable buzz.

Nearly the entire pitching staff stood side-by-side behind Harvey as he threw warm-up pitches on a mound in foul territory down the left-field line, although Harvey said he did not notice their presence until afterward, when they gave him fist-bumps before he entered the game. Fans lined the railing to get an up-close look. Harvey said he had been so out of practice in warming up, he threw 10 or 15 pitches too many before entering the game.

"When I left the dugout and was running out to the outfield to warm up, I could hear the fans," Harvey said. "That moment really reminded me of the All-Star Game [in 2013 at Citi Field] and the support that I was given there. That was really special. So that will be something I remember for a long time."

Jaden Ramos, the 13-year-old son of slain NYPD officer Rafael Ramos, presented the lineup card with Harvey's name in the pitcher's slot at home plate before the game.

Harvey fired a 96 mph first-pitch fastball to Tigers leadoff batter Anthony Gose and eventually struck him out with a 98 mph heater. Harvey then shattered the bats of Jose Iglesias and Rajai Davis while inducing groundouts. An inning later, Nick Castellanos flied out. Harvey then struck out Jordan Lennerton and Bryan Holaday, the latter with a sharp-breaking curveball on a full count.

Harvey said it sunk in as he took the mound for the second inning that it was "realistic" that he had returned to a game.

"The big thing is I was happy throwing strikes and not walking anybody. Those are the things you try to work on," Harvey said. "Especially hearing things about guys going through this process and having tough command, for me, that was the big thing that I was focusing on today. And I was pretty happy about it."

Harvey had become more reliant on a slider as a professional but has rediscovered the curveball as he rehabbed from Tommy John surgery. He pledges to use it more this season.

"A 3-2 curveball, it kind of brings me back to high school a little bit," Harvey said about his final pitch Friday, to Holaday. "For me, having that as another weapon is pretty nice."

Harvey, who threw 25 pitches in the two-inning effort, received a handshake from manager Terry Collins as he reached the dugout after the second frame. The ace jokingly asked Collins if he could pitch another two innings -- knowing full well the two will butt heads over innings limits at times during the regular season.

"I was joking with Terry a little bit because I know at some point we're probably going to have some innings limits," Harvey said. "I asked him if I could go out for a couple of more innings, and that was laughed about. Obviously, we both know that's going to happen at some point. So giving him a little chuckle about wanting to go back out was my way of saying I understand the process and I know how things are going to go."

Harvey expects to pitch again in a Grapefruit League game in five days, against theMiami Marlinsin Jupiter, Florida, on Wednesday.

He said Friday he did not peek at the radar gun, where the displayed fastball velocity exceeded his 2013 average of 95.8 mph.

"I've said I feel like I've never left," Harvey said. "I could tell the ball was coming out good."

Harvey Tosses 2 Perfect Innings In Mets' Win
The Mets beat the Tigers 5-4 in Matt Harvey's return to the mound.