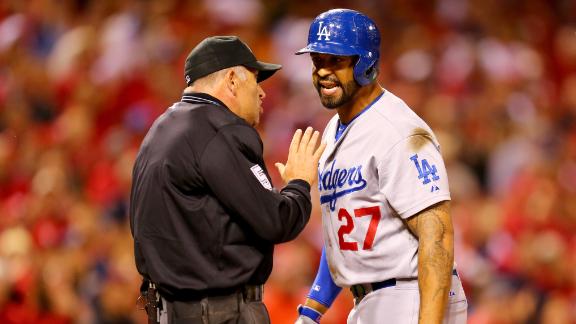 ST. LOUIS -- Los Angeles Dodgers slugger Matt Kemp, who got in a heated argument with plate umpire Dale Scott late in histeam's 3-1 loss to the St. Louis Cardinals in Game 3 of the National League Division Series, blasted the veteran umpire after the game.

The Dodgers, who were swinging hot bats coming into the game, were held to seven hits by veteran right-hander John Lackey and two Cardinals relievers.

"Terrible. Terrible strike zone," Kemp said. "I've never seen anything like it. That's disappointing because you've got guys out there battling. You know, this is two good teams going at it, and it's supposed to be the teams, not the umpire, and I just feel like the umpire took the bat out of our hands today. He had a very generous strike zone. It's hard to face good pitching when you've got a guy throwing a ball in the other batter's box, and it's called strikes."

Other Dodgers were more diplomatic in their comments but also expressed frustration with Scott's zone.

Adrian Gonzalez declined comment and said Lackey "put the ball where he needed to."

Manager Don Mattingly also called Scott's zone "generous" and said, "It puts you in a bind. You keep giving pitches, changing counts. Obviously, you can't go too far with it, but real generous."

According to MLB PITCHF/x, which is a pitch tracking system that examines velocity, movement, release point, spin and pitch location, Scott's correct call percentage Monday night was 83.7 percent. The league average for umpires this season was 88.5 percent.

Scott's correct call percentage during the regular season, meanwhile, was 87.5 percent, 74th of 90 major league umpires, according to PITCHF/x.

Kemp, who got in a face-to-face argument with Scott after he struck out to lead off the ninth inning, could be facing a fine from the commissioner's office for his postgame comments.

He seemed OK with that and joked to reporters after he spoke. "You all got what you want from me," he said.

Kemp, who led the major leagues in slugging after the All-Star break, finished 0-for-4 with two strikeouts in Game 3.

"You've got to be held accountable, man," Kemp said. "When we mess up and do bad things on the field, people talk about it. People get sent down when they play bad. I feel like when stuff like that happens, there should be some kind of punishment because it's unacceptable, man."