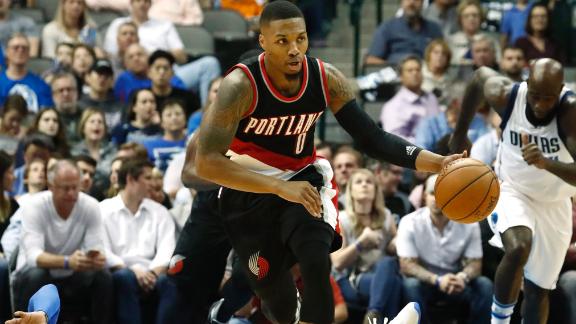 Dallas Mavericks star Dirk Nowitzki will miss at least a week because of lingering soreness in the 38-year-old's right Achilles tendon.

"He's going to be out for a while," coach Rick Carlisle said during his news conference Friday night after the Mavs fell to 0-5 for the first time in franchise history with a 105-95 loss to the Portland Trail Blazers. "We'll update you guys in about seven days. He's not going to play at least until then."

Nowitzki, the sixth-leading scorer in NBA history, did not play in the second half of Friday's loss because of the soreness, which has been an issue since late in the preseason. He had five points on 2-of-6 shooting in 16 minutes during the first half.

"It gets better on days off, and as soon as I go out there and try to push off, try to show on pick-and-rolls, run backwards, all that stuff is just uncomfortable and sore," Nowitzki told reporters. "So just thought I'd just shut it down. I mean, it makes no sense to keep dragging this for weeks, you know? Obviously, it hasn't really gotten better, so we're going to take a few days off and not get on the court, not do all the stuff that makes it sore. And hopefully, I'll be better in a couple days and we can ramp it back up.

Nowitzki, a 13-time All-Star who remains the Mavs' franchise player in his 19th NBA season, has led Dallas to the playoffs in 15 of the past 16 seasons. The lone exception was the 2012-13 season, when Nowitzki missed the first two months after undergoing arthroscopic knee surgery.

"It's bad news, but we'll get through it," Carlisle said in his news conference. "We've gone some periods like this before, but his health is the most important thing. He's more than willing to continue playing, but it's pretty obvious that things aren't right, so we've got to do the right thing here and back him off."

Nowitzki missed the Mavs' second and third games of the season because of an illness and said upon his return that he hoped the Achilles issue had subsided. However, it flared up again after he played 29 minutes in Wednesday's loss to the Utah Jazz.

"It felt better after a couple days of not doing anything, but as soon as I got back out there with the cutting, with the showing, with the quick changing of direction, it went right back to the same old [pain]," Nowitzki said. "I'm already obviously not moving great at 38 as it is, and to be out there on one leg is really not helping myself. It's not helping the team at all.

"I don't think it's anything major. It's just that the Achilles is inflamed. We've been trying a bunch of stuff. I've been getting treatment for hours every day. My guy from Germany is even here. He's been treating me every day for over two hours and I've been on the meds, and nothing really has made it better to the point where I can move out there without it bothering me."