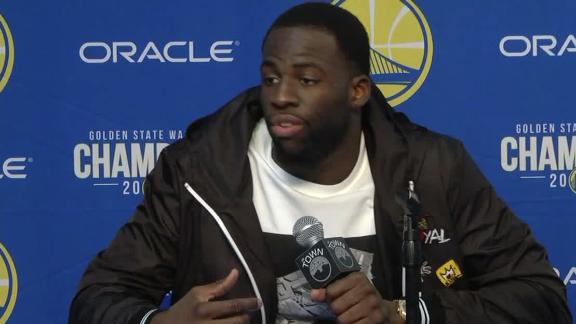 Golden State Warriors forward Draymond Green spoke on the sexual assault scandal that has enveloped his alma mater, Michigan State, saying he wishes "the victims well on the road to recovery."

"As a die-hard Spartan fan, as an alumnus, as a supporter, I wish those who were affected, touched by it, broken by it, shaken, whatever it did to you, I wish them well in their recovery. Because it touches everybody in a different way," Green said after the Warriors' win over the Boston Celticson Saturday night. "Whether you're a supporter and it kills your pride or whether you're a victim and you're going through the things that you're going through."

Green played at Michigan State under coach Tom Izzo from 2008 to '12. Izzo and Spartans football coach Mark Dantonio both said Friday night that they have no plans to step away from their positions in the wake of an ESPN report about a pervasive culture of sexual assault on campus and within their two programs.

Outside the Lines published a report on Friday about the "pattern of widespread denial, inaction and information suppression" when it comes to addressing sexual assaults on Michigan State's campus and within its athletic department. Interviews and public records obtained by Outside the Lines show that at least 16 members of the Spartans football team have been accused of sexual assault or violence against women.

On Friday, Walton was placed on administrative leave from his duties as assistant coach of the LA Clippers' G League affiliate. One of the basketball players accused of rape in the OTL report, Adreian Payne, was waived by the Orlando Magic's G League affiliate in Lakeland, Florida.

"I offer my support to Coach Dantonio and Coach Izzo in their efforts to rebuild and to help the victims in any way that they can," Green said. "They say the true test of a man is what he does in a time of adversity. I know those two guys will stand up and do whatever they can to help. I look forward to helping in any way I can. Those affected, supporters, most importantly, the victims, any way I can help, I look forward to that."

At Pro Bowl practice on Saturday, Pittsburgh Steelers running back Le'Veon Bell -- another former Michigan State athlete -- said he "felt bad for everything that happened to all the women," adding that both D'Antonio and Izzo "do everything the right way."

"I'm obviously hoping for a turnaround. I mean, it's kind of a big target on our back right now. I just kinda wanna be a supporter, the best that I can," Bell said. "And I want Michigan State to be the top of the class -- basketball, football, all that, all athletics -- make things go the right way. This can kinda go down the line, and people kinda forget about it because we did a lot of positive things more so than negative things coming out of the university."

The scandal's aftermath has seen the resignation of university athletic director Mark Hollis and president Lou Ann Simon this past week.